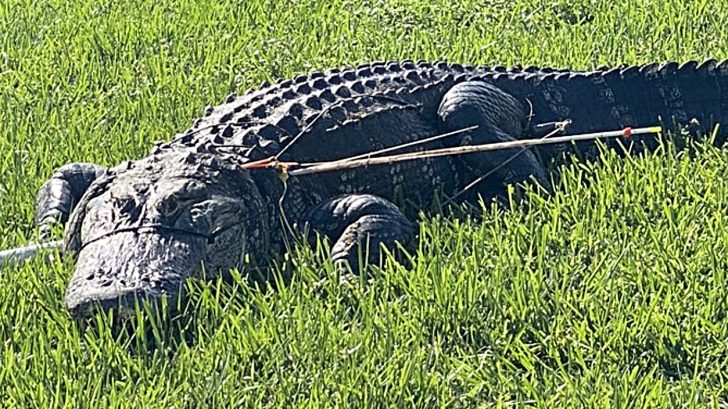 On Wednesday, April 28, 2020, Southwest Florida Crime Stoppers tweeted a public statement asking for tips on a dead alligator they found with arrows sticking out of its side.

The gator was allegedly found in Fort Myers, Florida after an anonymous person called the Lee County Sheriff’s Office to report that they spotted the alligator behind a residence on Oak Hill Loop. When police arrived on the scene, they found it lying lifeless next to a pond with no one else around.

In addition to being shot with two arrows, the alligator had rope wrapped around its snout and webbed feet. The Florida Fish and Wildlife Conservation Commission got called to come safely removed the gator from the property. Southwest Florida Crime Stoppers said if anyone has any information on who did this to please call 1-800-780-8477.

Under Florida law, it is illegal to kill, injure, capture, or possess an alligator, or its eggs without a permit. The only way you can justify killing, injuring, or capturing an alligator is in the case of self-defense. Alligators are protected and are considered a threatened species by the federal government, and classified as a “species of special concern” by the state.

Florida has over five million alligators and wildlife officials say they want to maintain that figure because it’s an optimal population number to sustain the species.

On Wednesday, April 28, 2020, @leesheriff received a call for service regarding a large injured alligator in the pond to the rear of a residence on Oak Hill Loop in Fort Myers. pic.twitter.com/l1jGrsP2YX