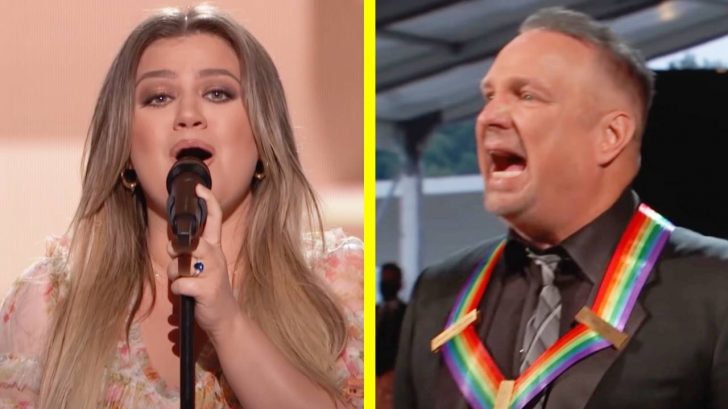 On May 22, the 43rd Annual Kennedy Center Honors, which honors five people or groups for their contribution to American culture through the arts, took place. Choreographer and actress Debbie Allen, musician Joan Baez, violinist Midori, Dick Van Dyke, and Garth Brooks were selected to be honored in 2021.

To honor these incredible legends, Derek Hough, Vanessa Hudgens, Pentatonix, Gladys Knight, Emmylou Harris, Jimmie Allen, Yo-Yo Ma, and Kelly Clarkson took the stage for a ceremony that will be aired on Sunday, June 6th on CBS and will be available to stream on Paramount+.

Clarkson had the task of paying tribute to Garth Brooks, who she has known for a long time and has even had as a guest on her talk show a couple times in recent years. She performed his already emotional song, “The Dance,” but somehow took it to another level with her delivery.

Standing on the stage in Washington D.C., Clarkson’s voice quivered at times singing the song Brooks released over 30 years ago.

The Emmy-winning talk show host expressed to Brooks late last year that “The Dance” had been helping her get through her divorce.

“So I’m going through a divorce and there’s been like a lot of books and people always give you stuff to help, especially when you have kids and stuff,” she said at the time. “And there’s so much shame and guilt.”

Clarkson continued, “I couldn’t quite nail down the feeling. Like you don’t want to crap on it, like, you don’t want to say that [relationship] doesn’t count or matter, but you don’t know what to put in it because it didn’t work out like you wanted. So, anyway, I kid you not, I was listening to my playlist and ‘The Dance’ came on. And I was like, ‘No, that’s the thing. That’s it.'”

The Kennedy Center Honors aired on CBS on Sunday night (June 6) and showed Clarkson’s entire performance of the legendary song. She started it off a cappella before her music director accompanied her on the piano. Cameras kept cutting to Brooks, who can be seen saying “That’s so great” during the performance.

At one point, Brooks began to cry and after Clarkson sang the final note, he jumped to his feet, took off his hat, and yelled, “Damn!”

Watch Clarkson’s full performance of “The Dance” below.