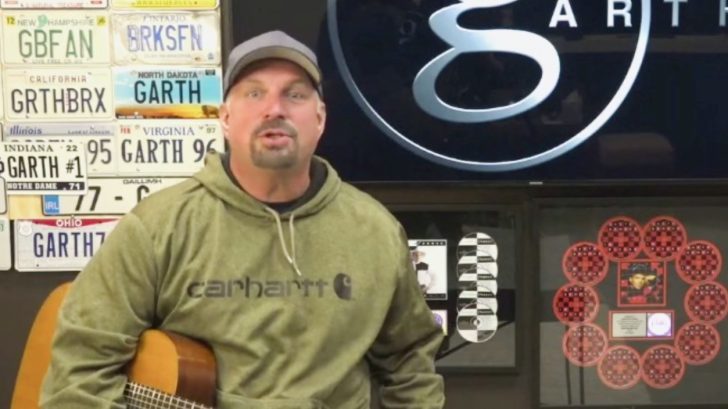 Garth Brooks was originally supposed to perform in Ireland in 2014. It was the year his youngest daughter, Allie, turned 18.

Allie asked her dad if he’d get a tattoo with her in Ireland to celebrate her birthday:

“So, My daughter Allie is pretty inked up,” Garth said during one of his recent Inside Studio G sessions on Facebook. “She is the one of my three daughters that’s pretty inked up. She said, ‘Dad. I turn 18 in 2014.’ She goes, ‘Let’s go to Ireland and get a tattoo together. I said, ‘Okay. So, I promised her I would.”

Unfortunately, Garth’s Ireland show ended up being canceled. He was sad about the show, but somewhat relieved he didn’t have to follow through with getting a tattoo.

But Garth finally got the chance to perform in Ireland in September of this year. And Allie made sure Garth remembered his promise:

Garth remained true to his word, and got the tattoo while he was in Ireland, going all-out with an elaborate piece that honors the special women in his life. He said the tattoo has portions dedicated to his three daughters, his mother, and his wife Trisha Yearwood:

“It’s all about them!” Garth said. “It’s front and left chest. It’s front and left back. And it’s a full sleeve. I have five women in my life, my mom, Miss Yearwood, and my three daughters. It’s all about them – and it’s all about them being on my shoulders, and around my heart and by my side. I love it…I know my three daughters have my back and are by my side ’til I’m in the grave. But something about having them inked on your skin right here, by your side the rest of your life – [is] pretty frickin’ cool. So my mother is on my shoulder, and Miss Yearwood is right here on my heart.“

Garth did not reveal what his tattoo looks like, but we’re excited to see it when and if he does!

He said he’s “glad” he finally ended up getting a tattoo. And it’s all the more meaningful because he got it in honor of the people he loves:

“Well, the thing you’ll take for life is the tattoo,” Garth said. “So with me forever, I’ll take the five women in my life, my mother, my three daughters, and Miss Yearwood, all in places on my body…All close to my heart. So it was pretty cool.”

Hear Garth talk more about his experience in Ireland and other things he’s done lately by tuning in to the video below.