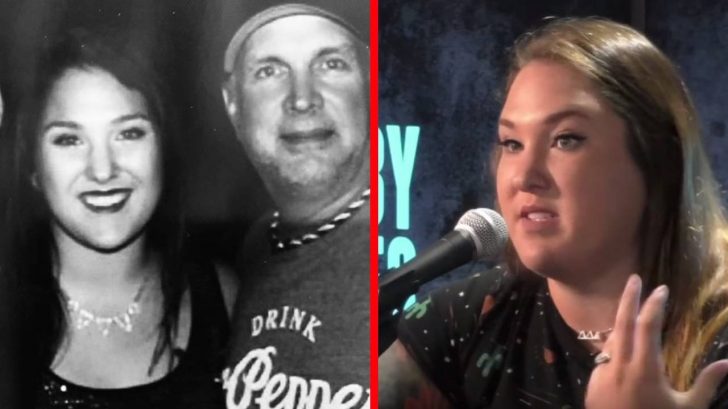 Allie celebrated the release of her single by sharing her excitement on Instagram.

She received some incredible support on social media, including from her famous dad and stepmom, Garth Brooks and Trisha Yearwood.

“What a beautiful voice on your grandmother’s birthday…perfect. I love you!! Listen to [Allie Colleen]’s new single,” proud dad Garth wrote accompanying a photo of him with Allie and Trisha.

What a beautiful voice on your grandmother's birthday…perfect. I love you!! Listen to @alliecolleenmusic’s new single #WorkInProgress (link in bio or copy/past http://smarturl.it/allieworkinprogress )

To promote her new single, Allie stopped by The Bobby Bones Show where they talked about her tattoos, the deal she made with her dad, and her favorite song of his.

Since Allie was a little kid, she knew she wanted to be a musician, but made a deal with her parents that she would graduate from college before pursuing it. She attended Belmont University and graduated in May 2018.

Kept my promise, now it’s all about you.

Now, she’s worked extremely hard to be a musician in her own right, even dropping her last name to do so. After a few minutes of chatting, Bones said, “I would be remiss if I didn’t ask you, what is your favorite Garth Brooks song?”

After a little hesitation, Allie said that it is “When You Come Back To Me Again,” which he released in May 2000 as the lead single off his album Scarecrow and was featured in the movie Frequency.

Bones showed his surprise saying, “Oh wow, you went for a deeper cut,” to which Allie responded, “What’d you expect me to say? ‘Friends In Low Places’? I hate that song!”

“You can only imagine the pick-up lines in high school that come from ‘Friends In Low Places‘,” Allie said with disgust.

After asking her for an example, she reluctantly agreed.

“I’ll be your friend in low places,” she said, revealing what guys would often say to her. “It freaks me out!”

Are you surprised by her admission?