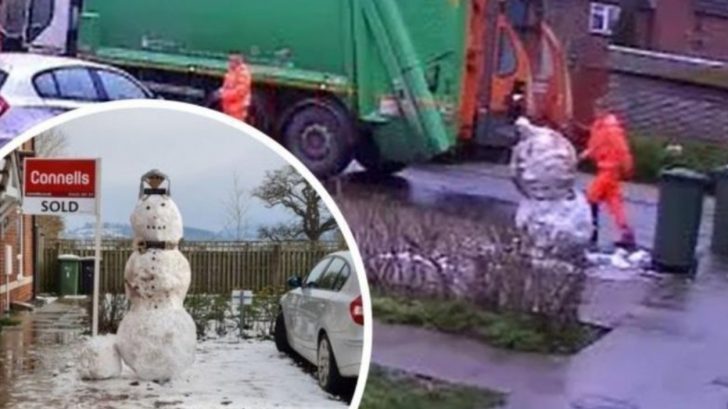 Three-year-old Joseph Taylor from Tupsley, Hereford, UK, broke down into tears one afternoon after looking out the window and watching the garbage truck guy karate kick the head off his snowman he, his six-year-old sister Amelia, and their friends built.

Joseph’s mom Sophie said the boy normally watched the garbage men get the trash and often waved at them, but today, he came running to his mom crying saying that “the binman has broken my snowman,” and doing a kicking motion.

She looked out the window to check on the snowman and that’s when she also noticed it was destroyed. When she watched watch their CCTV security footage, she saw it was the younger garbage truck employee wearing an orange boiler jumpsuit who did the deed.

“What kind of person does that to a snowman? It was obviously made by children but he just started kicking it in the head. To do that in front of Joseph makes it just so heartless,” Mirror UK reported Sophie saying.

After reporting it to the Herefordshire Council, they later contacted Sophie to let her know that the garbage man was fired from his job for the incident. The young man was later identified as 19-year-old Callum Woodhouse who openly spoke out and said he was not sorry for kicking the snowman but he would help the boy build another one.

Callum’s girlfriend is expecting a baby soon and he has been working to save money and getting fired from his job was a major hit to his family’s income. A petition was started to get his job back and, as of current press, 10 thousand people have signed it so far.

“The guy worked throughout the whole pandemic, risking his own wellbeing and that’s what he gets?!” the petition read. It was, “already melting anyway. Grow up and give the man his job back!” it added.

It’s a touchy situation for everyone involved. What would you do in this situation?