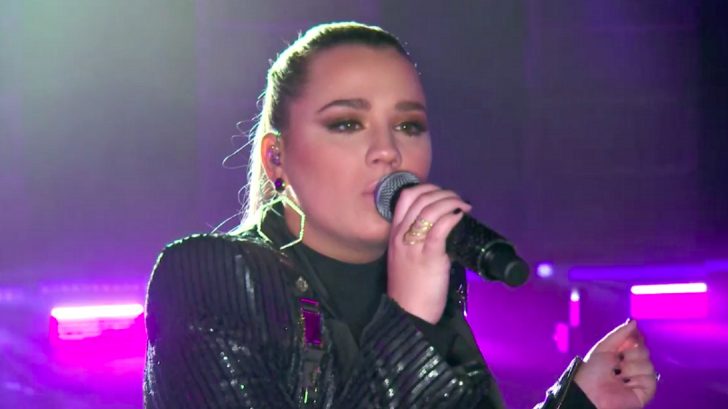 American Idol alum Gabby Barrett has been making waves in country music since the release of her debut single, “I Hope,” in 2019. Barrett independently released the song after placing third on Idol in 2018 and attracted the attention of record labels, eventually signing with Warner Music Nashville.

Warner officially released “I Hope” as a single in 2019 and a year later released a rendition featuring a collaboration between Barrett and Charlie Puth. The single hit number ten on the Billboard Hot 100, something no other female country artist has done since Taylor Swift.

Barrett, who wed fellow American Idol alum Cade Foehner in October 2019, announced that the couple was expecting their first child after the first of the year. She debuted her adorable baby bump during the 2020 Academy of Country Music Awards show in September, and she showed off her pregnancy glow again during Wednesday’s (October 21) CMT Music Awards.

Dressed in all black, Barrett’s baby bump was barely hidden, but her pregnancy glow was evident as she rocked out while performing “I Hope.” The singer was joined by her husband for the performance that was highlighted by a firework show.

“That’s amazing! Oh my gosh. Okay, I don’t even know what to say because I didn’t really think that I was going to win. But first, oh my gosh, my fake trophy in my hand right here, I would like to thank my Lord and savior Jesus Christ, because I wouldn’t be able to be doing what I love every single day without Him. So thank you, Lord,” Barrett said in her acceptance speech.

Gabby Barrett, "I Hope" you know your CMT Music Awards performance was showstopping ?