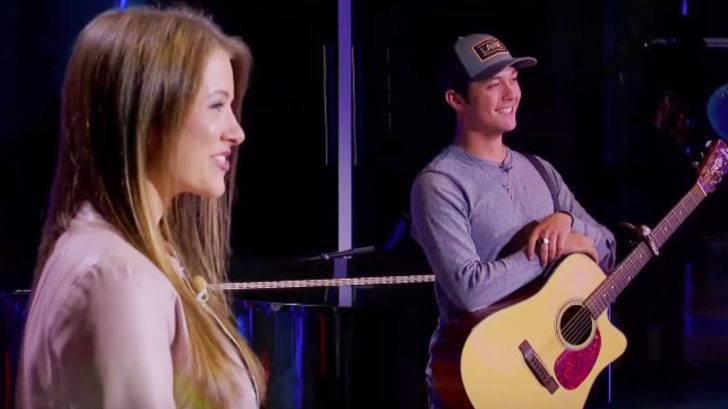 After trying to make his way through American Idol once before being eliminated, Laine Hardy had no plans to return to the singing competition series in the immediate future. But those plans changed when his friend, Ashton Gill, asked if he’d be willing to play guitar at her audition for the new season.

Hardy said yes, hoping he’d be able to help his friend earn a golden ticket to Hollywood. He likely never imagined he’d be leaving the room with one of his own that day.

And we bet he never dreamed that he’d eventually be named the winner of that season.

Rise and shine and watch new #AmericanIdol Laine Hardy on The View!

In the now-famous audition that has been viewed millions of times online, the Idol judges can be seen freaking out as soon as Hardy walks into the room. They give Gill the chance to sing before they start begging Hardy to sing them a little something.

He delivers, and impresses them with his refined voice and newfound sense of confidence. After all, he was previously eliminated from Idol for being too shy on stage.

After hearing Hardy sing, Lionel Richie thrust a golden ticket his way, begging him to take it and embark on an Idol journey once more. Although another Idol run was never part of Hardy’s plan, he took a chance and accepted it.

Hardy and Gill’s friends and families were excited that both singers made it through to Hollywood and got the chance to showcase their talents in front of the world world. Sadly, Gill’s Idol journey ended long before Hardy’s, since she was eliminated early on in the competition.

But even though Hardy advanced all the way to the finale (and eventually claimed the winning title), Gill seemed to harbor no jealous feelings toward her friend. The two reunited just before the finale, which is when Hardy got the chance to experience a hometown visit as a member of the Top 3.

Gill posted a photo of the two of them together, saying how excited she was for Hardy and how she was pulling for him to win the show.

Ashton Got To Watch Laine Win In Person

So after Hardy was crowned the Idol champion, Gill was overjoyed. She responded to his big win on social media, revealing that she was actually on set that day to be able to celebrate with Hardy and the other contestants in person.

“What a night to say the least! My friend @thelainehardy just WON @americanidol and I could not be more proud and happy for you!” she wrote.

The first photo Gill shared in a slideshow of images shows her standing with Hardy after the big news was announced, because you can see him clutching the glittery results envelope that had his name inside.

Just look at those smiles! You can tell how thrilled Hardy was that he won the show, and you can see how happy Gill was for him!

In case you didn’t get the chance to watch the emotional moment when Hardy was named the newest “American Idol,” be sure to tune in to the video below. Almost immediately after being proclaimed the winner, he was ushered into singing his new song, “Flame.”

Many of Hardy’s fellow contestants joined him on stage for the performance, proving that they, like Gill, are so proud of all he has accomplished!