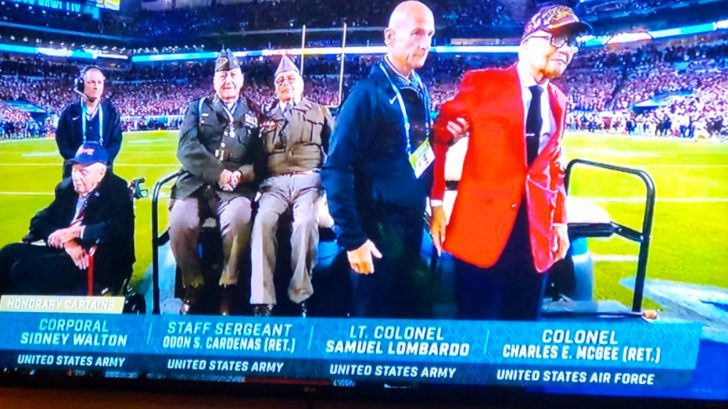 In honor of the NFL’s 100th season, four 100-year-old World War II veterans were the guests of honor at the 2020 Super Bowl. The four veterans were Charles McGee, Odon Cardenas, Samuel Lombardo, and Sidney Walton.

FOX News described the veterans’ accomplishments during their military careers.

McGee was part of the Tuskegee Airmen, and flew 136 combat missions during WWII before later going on to serve in Korea and Vietnam. Cardenas fought in the Third Army under General George Patton, and was briefly a POW before he was rescued.

Lombardo was a rifle platoon leader and company executive officer, and fought during the Battle of the Bulge. As for Walton, he fought in China, Burma, and India, during the war.

The four veterans can be seen in the pictures contained in the below tweet.

“By honoring these four veterans at the championship game, the league is preserving the national memory of the Greatest Generation and World War II,” Rotondi said.

The four veterans were honored during the Super Bowl by being brought out on the field before kickoff. They all got the chance to participate in the coin toss, and were right in the center of the action as the San Francisco 49ers made their call.

After the referee showed off the commemorative coin made to celebrate the NFL’s 100th season, the 49ers called tails. They won the toss, and chose to defer to the Kansas City Chiefs.

McGee, Cardenas, Lombardo, and Walton could be seen in the background during the toss. In case you missed seeing them when the Big Game was broadcast, you can rewatch the coin toss below.

We salute these four American heroes, and thank them for their service. We’re glad their accomplishments and service were recognized in such a grand way. They certainly deserved that recognition.

The @49ers win the toss and elect to defer.

The @Chiefs will take the ball to start the game.