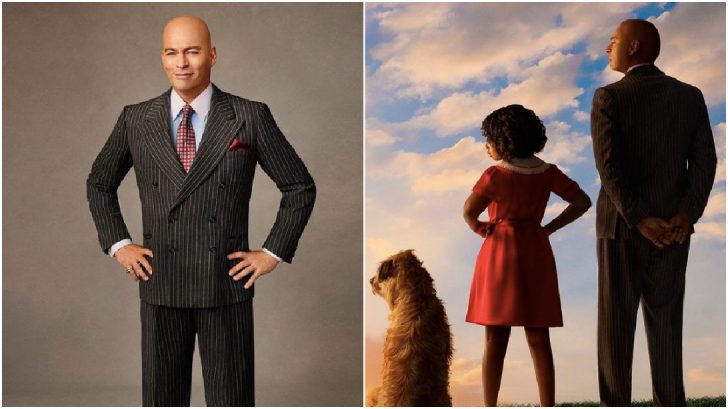 The beloved Tony award-winning musical Annie is coming to television in for a live performance on December 2. While the story line is well-known and recognizable, one of the stars of Annie Live! may be tough to recognize thanks to a drastic appearance change.

Former American Idol judge and dynamic jazz crooner Harry Connick Jr. has been enlisted to play Oliver Warbucks, the billionaire who agrees to let orphan Annie live at his mansion to promote his image. To maintain the dignity of the original character, Connick Jr. knew he had to be bald for the part.

“That character has been around since I think the ’20s. That’s who Daddy Warbucks is,” Harry told Vanity Fair in a new interview. “I thought it was pretty important to portray him the way the original comic strip portrayed him.”

The musician starts rehearsals for the live show in mid-November, but donned a bald cap for the press photos that were recently released. But, he is still considering swapping his signature dark locks for a shaved head for the live performance.

“I haven’t made up my mind for the actual show. For the press photos, I had a bald cap on, but we’ll see what happens with the show,” Connick Jr. said. “The problem is I have other things going on, and it’s kind of hard to do those things with a bald head. It takes so long for your hair to grow back. But we’ll see when it comes.”

Harry Connick Jr. has done his share of television, musicals, concerts and more, but this is his first foray into live television musical.

“I think of it as sort of the same as anything else. I start to develop my thoughts in my head and then, in this case, you go through the rehearsal process and then it’s time to go on stage. That’s what I love to do the most,” the 54-year-old said. “And the fact that this is a combination of live television and theater is really exciting. I’ve never done that before, so I’m thrilled to be able to do that.”