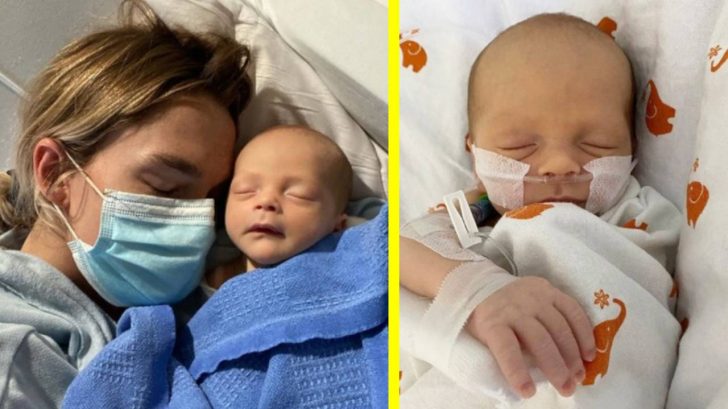 In 2009, Casey Carlson auditioned for the eighth season of American Idol. Performing Vanessa Carlton’s “A Thousand Miles,” the Minneapolis-based singer impressed judges Simon Cowell, Randy Jackson, Paula Abdul, and Kara DioGuardi enough to give her a golden ticket to the next round.

During Hollywood Week, the singer performed “Every Little Thing She Does Is Magic,” which wasn’t enough to continue her Idol run.

Her dreams of becoming a singer didn’t end there, though. Now Casey Goode thanks to her marriage to Alex Goode, she is actually known as “Quigley” and has made a name for herself on all social media platforms, especially TikTok.

The married couple welcomed their son Maximilian Vaughn Goode on September 18 and due to a few complications, he was rushed to the NICU. After spending eight days there, Max was released, healthy to return home with his loving mom and dad.

On Sunday (Oct. 4), Quigley took to Instagram to give her followers an unexpected update about her baby boy’s health – he had tested positive for COVID-19.

“Max tested positive for COVID-19 early Saturday am,” she wrote. “We took him into the ER after he was running a fever in the middle of the night. We had confirmation that he was exposed from direct contact with a medical professional who had cared for him earlier in the week.”

The singer continued, “This has been a total shock to us. I am currently quarantining with baby Max in the PICU. They are treating me as if I have been exposed and are likely positive as well, although I am showing no symptoms yet. Please send good energy to our little bub so he recovers fast. Not sure what happens next from here… but I expect to be offline for a while as we recover.“

Goode also asked his followers they keep his wife and son in their thoughts.

Max tested positive for COVID-19 early Saturday morning. He and @officiallyquigley are currently quarantined together in the pediatric ICU. His fever has come down since being admitted, but he has been put on oxygen as a precaution. We are in good spirits but we could also use some positive vibes, so please keep Mad Maxi & Mama Quigley in your thoughts tonight ??❤️

We wish Quigley and Max a speedy recovery!