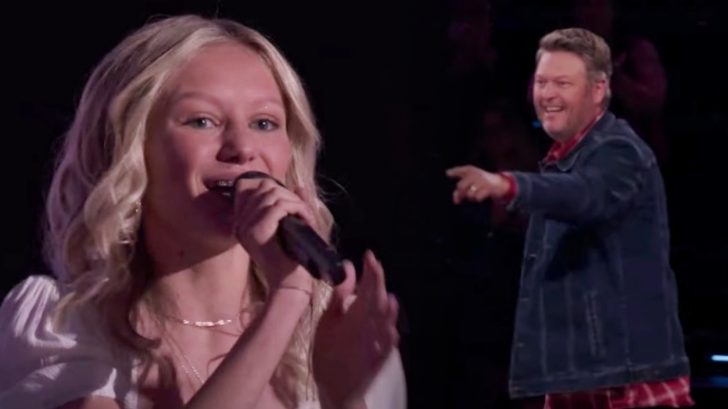 Y’all may remember the name Ansley Burns if you watched Season 14 of America’s Got Talent. She auditioned for the show with a performance of an Aretha Franklin classic. But judge Simon Cowell stopped her mid-performance because he thought it sounded “terrible.”

Though he liked the sound of Burns’ voice, he was not a fan of her backing track. He asked her to sing without it, and ended up liking her performance much better.

Burns was eventually eliminated from the competition, but was brought back as a wild card contestant. She advanced all the way to the semifinals before she was eliminated again.

If you were a fan of Burns on AGT, you can watch her on Season 22 of The Voice! Now 15 years old, Burns auditioned for the show with a performance of the iconic song “Unchained Melody.”

Blake Shelton could tell that his wife, Gwen Stefani, was intrigued by the sound of Burns’ voice. He had no intentions of competing with Stefani for Burns, so he used his block. This shows how much he wanted Burns for Team Blake…since the coaches can only press their block button once during the blind auditions.

Shelton was right to use his block, because Stefani turned her chair shortly after he did. She was enjoying Burns’ performance so much, it took her a second to realize she was blocked!

First, the coaches gushed about how cute and small Burns was. Shelton, who’s quite tall, stood up beside her on stage for comparison. She looked so tiny next to him!

Overjoyed to have Burns on his team, Shelton said, “I literally used my block on my wife…Ansley you’re stuck with me I’m sorry…I’m your coach and there’s nothing you can do about it.”

Burns was thrilled to have Shelton as her coach. She said, “I’m so honored, thank you so much.”

We’re so happy to see Burns singing again on The Voice, and we’re also happy she’s on Team Blake! Watch her outstanding audition below.