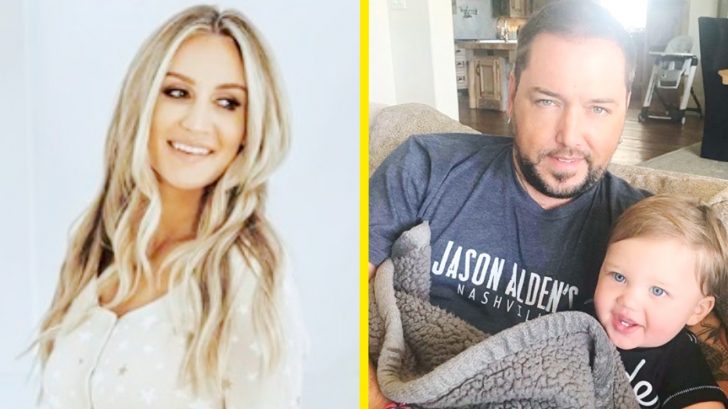 Ever since Jason Aldean‘s son Memphis was born on December 1, 2017, fans have been adamant that he’s Jason’s min-me. Of course, few people dispute this, since all you have to do is look at a photo of the father-son duo to confirm that they are basically the same person.

What are the odds your Birthday is on the same day as the SEC Championship and Bama is playing Georgia? Send mama some good vibes baby!!! ROLL TIDE?

The similarities have always been there, but they’ve become even more obvious as Memphis has grown.

And if you are one of the few people that thinks Memphis looks nothing Jason, wait until you see one of Jason’s childhood photos.

The Proof Is In The Pictures

Back in December, Brittany shared a throwback photo of a toddler-aged Jason all decked out in a sporty outfit. The future country star was wearing a big baseball helmet he was trying to hold in place with one hand while holding a bat in the other.

Some fans who didn’t read Brittany’s caption just assumed the photo was of Memphis, and that Brittany had placed a filter on it that made it look old-school in style. But nope, this photo is actually of Jason!

As a comparison, look at that above photo of Jason and then check out the below picture of Memphis. There’s no denying their likeness!

While the resemblance between father and son seems indisputable, some people still see the similarities between him and his mama. In fact, Jason himself is one of the biggest supporters of Memphis being Brittany’s mini-me, and he also shared some photo proof.

He posted these photos when Memphis was much younger, but he made a convincing argument in doing so. He first posted a side-by-side set of photos comparing himself to Memphis, and it was clear that at that stage in life, Jason looked nothing like his son!

People say this guy looks like me… here is a side by side. He is much better lookin than his dad. ? #memphisaldean

Then he shared a second side-by-side set, this one comparing a photo of Memphis to a baby photo of Brittany. At last, fans were able to look at his picture and say that he looked just like his mama.

Is This The First Time They’ve Ever Looked Alike?

If you needed any further proof that Memphis, can indeed, look just like Brittany, then look no further. While all of his recent photos have drawn “he looks so much like Jason” comments from fans, his most recent photo finally has him looking like his mama for once in his life.

Granted, his “twinning” moment with Brittany is mainly because of the clothes they were wearing when the photo was taken, as they had on matching outfits. Both wore black tops, black beanie hats, and marled grey pants, making them look like twins from head to toe.

For once, we can say that Memphis looks just like Brittany in this picture!

When you see mother and son in matching outfits like that, it makes it a little easier to see how Memphis also has some of his mama’s features. Only time will tell if he will grow up to look more like her as he gets older!

But if Memphis always remains Jason’s lookalike, Brittany still has hopes of having a mini-me of her own. She’s expecting a baby girl in February, and maybe she’ll end up being her mama’s little girl!

Regardless of who they look like most, Jason and Brittany love their kids dearly. Just listen to them gush about Memphis in the interview below…how sweet!