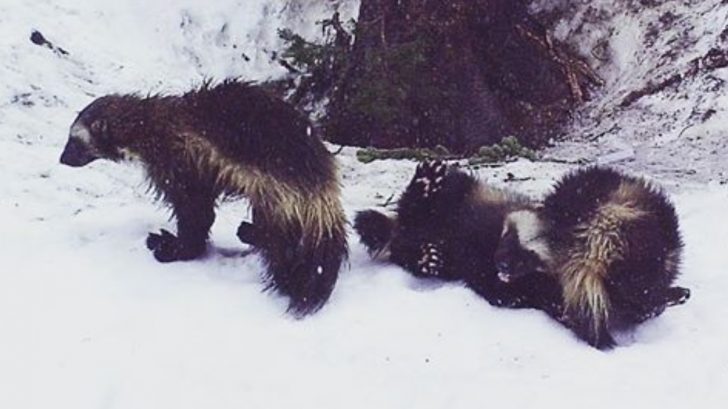 The recent discovery in Mount Rainier National Park, Washington has got a lot of people excited.

The story of the return of wolverines to Mount Rainier National Park in southern Washington began when we documented a new wolverine last November. We didn’t know if it was a female or a male, young or old. But from photos like this one we knew the wolverine was one we had not documented before. We were so excited. We expected this new arrival had come down from the north based on our experiences studying the genetics of other wolverines. This is an incredible feat to consider. A lone wolverine traversing vast stretches of wilderness, a checkerboard of logged and restored landscapes, and then crossing a major interstate at Snoqualmie Pass to reach the protected habitat at Mount Rainier.

A post shared by Cascades Carnivore Project (@cascadescarnivore) on Aug 22, 2020 at 8:45pm PDT

Wolverines were spotted in the park for the first time in over one hundred years!

The wolverine family was caught on camera by scientists of the Cascades Carnivore Project. They counted three wolverines: a reproductive female and her two offspring called kits. The family was spotted climbing on a tree together by one of the camera stations installed in the park. This one was installed in 2018 specifically to photography and identify wolverines.

We have discovered the first reproductive female wolverine and her two kits at Mount Rainier National Park in over one hundred years, in collaboration with National Park Service scientists. Photo 1: Wolverine mama, Joni, and her kits. Photo 2: Joni displaying her giant paws at one of our monitoring stations. #conservation #gulogulo #nps #mountrainiernationalpark #nature

This news was very pleasing to hear to the park’s superintendent Chip Jenkins because wolverines are extremely rare in the United States.

‘It’s really, really exciting. It tells us something about the condition of the park. Many species that live at high elevation in the Pacific Northwest, such as the wolverine, are of particular conservation concern due to their unique evolutionary histories and their sensitivity to climate change,” Chip told CNN Travel.

Hello stranger! We’ve missed you. This is a resident male wolverine at a wolverine-specific wildlife monitoring station…

National Geographic highlighted in July 2019 that Wolverines are very likely to suffer from climate change. These fierce carnivores are meant to live in a cold environment. If they are forced to live in a warmer environment it’s dangerous to their reproduction system which can lead to their potential extinction.

“Wolverines serve as indicators of future changes that will eventually affect more tolerant species and, as such, make good models for conservation in a changing world,” Dr. Jocelyn Akins of the Cascades Wolverine Project explained.

Video of three wolverines at the end of a snowfield then running through a meadow into a forest. Credit: Travis Harris -kl pic.twitter.com/ALwJoAOmTG

The Washington’s National Park Fund shared interesting information to the park visitors on how to recognize these small animals, to learn more about them and recreate safety without disturbing them. Visitors are asked to share any pictures or videos they take of wolverines to Cascades Wolverine Project to help better study them and monitor their comeback.