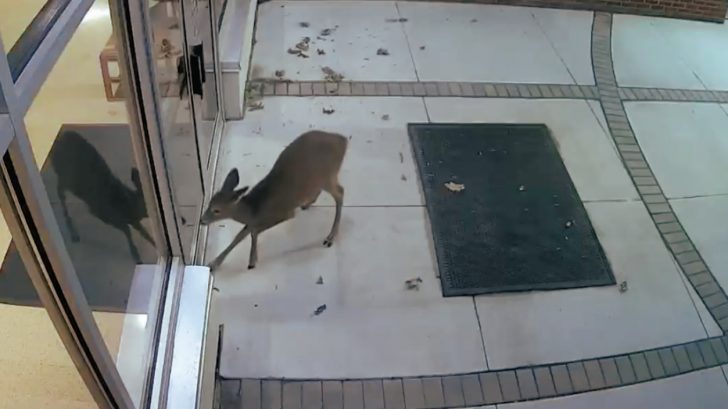 A female deer was caught on a security camera at the entrance of Clarence B. Lamb Elementary School trying to enter through the glass door.

The school is located in Wrightstown, New Jersey and the principal contacted NBC and gave them the security footage so that they could share it with the public.

The footage showed the deer running headfirst into the glass, slipping and sliding around as she got up and tried to get in again. The transparent windows clearly had the deer confused because she made several attempts to find a way in with no success.

After two whole minutes of failed attempts, she finally gave up and ran off to seek shelter somewhere else. Two NBC hosts covered the story and laughed about how funny it was.

“Every time he slams his head into the door it makes us cringe. He literally wanted to get into that school,” NBC host said about the incident.

The other host responded, “My theory is, he’s seeing his reflection, he wants to make a new friend, he’s a little lonely, and he’s just really trying. Now, after you get smacked in the head a couple times, you got to give it up man.”

Deer Tries to Get Into Elementary School Video Below