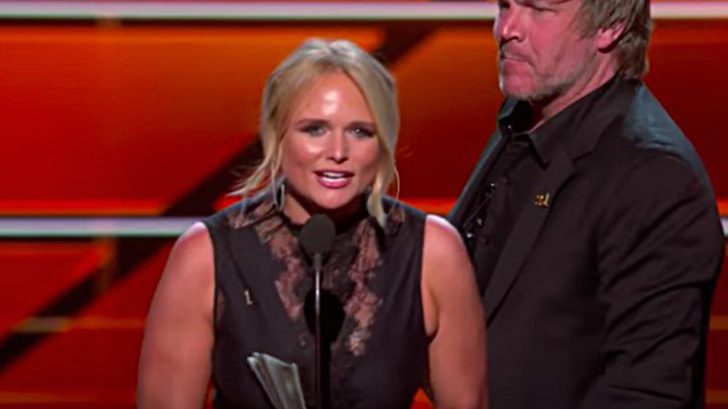 During the 2017 ACM Awards, Miranda Lambert debuted a brand-new single off of her album The Weight of These Wings. That song, titled “Tin Man” soon became one of the most critically acclaimed country songs of the year.

While Lambert wasn’t the sole writer on the song, it perhaps channels the heartbreak she was experiencing at that time in her life more than any other track on The Weight of These Wings. It’s a heartbreak that you can feel the strongest whenever she sings it acoustically.

“Tin Man” scored nominations at both the 2017 CMA Awards and the 2018 Grammy Awards, but didn’t win. So when it was revealed that it was nominated for Song of the Year at the 2018 ACM Awards, fans saw it as the last chance for the song to take home some hardware.

That’s exactly what happened! Early on in the show, Lambert and her co-writers, Jack Ingram and Jon Randall, took to the stage to accept the award for Song of the Year.

Lambert spoke briefly before letting Ingram and Randall say a few words. But she had a lot to say in the little amount of time she used:

“Thank you guys so much for sharing my broken heart with me,” she said.

Beyond the fact that it was Lambert’s first award win for “Tin Man,” her win for Song of the Year was especially notable. That’s because by winning the award, Lambert broke the long-held record by Brooks & Dunn for the most ACM Awards ever won.

Later in the night, Lambert won the Female Vocalist of the Year award for the ninth year in a row. That win ensured that she’ll likely hold on to her record for many years to come!

In case you missed it, be sure to check out Lambert’s Song of the Year acceptance speech in the video below. You can tell how grateful she is for her fans and co-writers!