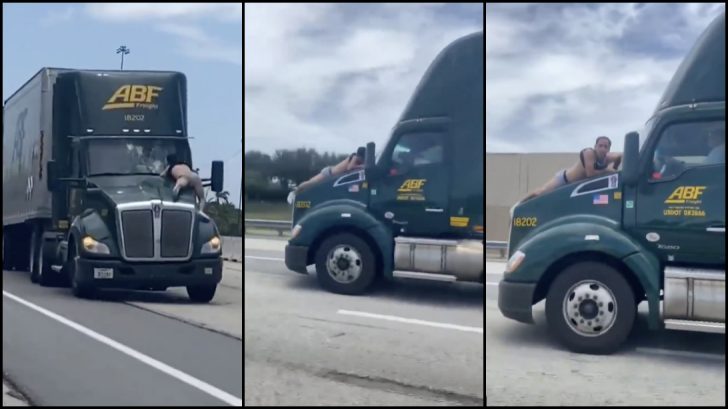 Commuters on I-95 in Palm Beach County, Florida, were witness to a surprising sight on the afternoon of August 1, 2020. According to witnesses, a man clung to the hood of a semi-truck for nine miles as it drove down the freeway.

Local news agencies report that the man was driving a Toyota SUV with a passenger when he began to act strangely. The driver then stopped the vehicle on an exit ramp, left the car, and walked along the highway before climbing on top of a concrete divider on the freeway median. As traffic slowed, he leaped onto the hood of a passing semi-truck and began to beat the windshield with his fists and head.

Instead of stopping, the semi-truck driver kept driving and can be seen swerving in an attempt to throw the man. At one point, the unwanted hood passenger turns to a passing car who is filming him and screamed, “Call the police!” After a nine-mile ride, a Highway Patrol officer caught up with the semi and took the man into custody.

The man was transported to a local hospital where he was held for a 72-hour period of observation. No serious injuries were reported.