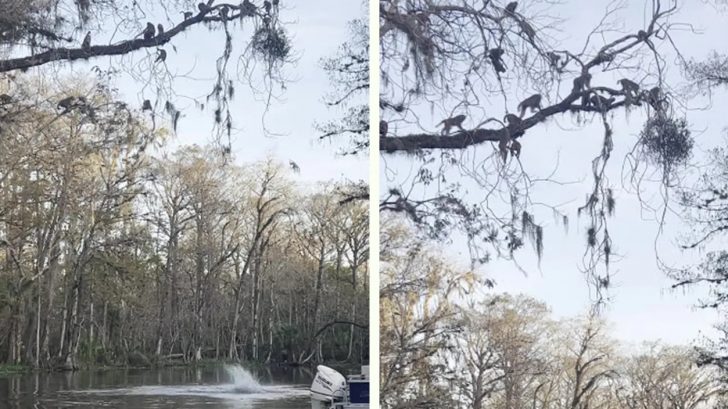 A family on a boating trip experienced a moment they are never going to forget and it was a turf war scene between two wild Florida monkey groups over a river.

The boating incident happened while the family was traveling down the Silver River in Silver Springs State Park and spotted the monkey getting loud and making a scene.

Footage taken on Dec. 3 showed what looked like a group of 20 or more monkeys in a tree yelling and screaming while some of them jumped 20 feet high out of the tree above the river and landed in the water below.

Matthew Schwanke was recording the video on the Silver River and said that before he started filming the video he noticed there were two monkey groups on each side of the river making a fuss with each other and then starting to jump to the other side to battle.

Monkeys were leaping from trees one after another into the water right in front of them making loud splashes and jumping from impressively high places.

“They’re all jumping!” one boy could be heard gasping as the monkeys leaped. “Dad, back up!”

“Large males were forcing females and babies to dive and cross the river by herding [them] out to the end of limbs, then jumping up and down on the limbs until they jumped/dove in,” he wrote on his YouTube page, according to FOX.

All Matthew could do is laugh while he continued recording.

“It’s raining monkeys!” he jokingly said. He pointed out that the “original troop being run off by the rival troop from the other side of the river.”

Matthew said that he runs the nonprofit Outdoor Valor which is a group that takes veterans on offshore fishing trips as a form of post-traumatic stress therapy.

Watch The Wild Footage Below