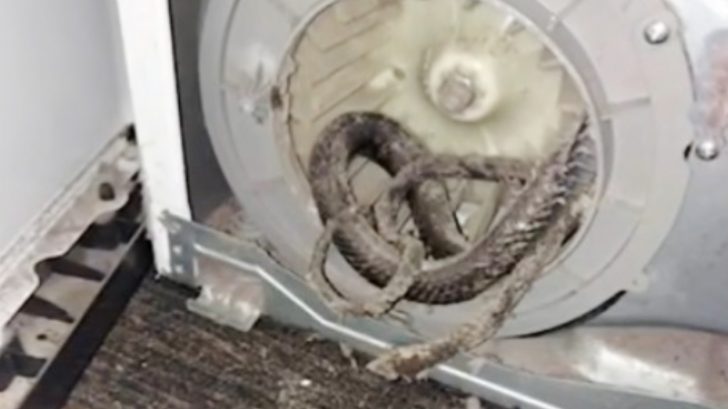 A Groveland, Florida family’s dryer was blowing out an unusually high amount of lint, so they called in a repair company to help fix the issue.

Alyson Pring told Orlando’s News6, “He came out said it was probably something stuck in there, the motor jammed, easy fix.”

Cobble went in to get a better look and eventually told Alyson, “There’s a dead snake in there.”

Alyson’s 13-year-old son Alex said he thought the snake Cobble found was a big “pile of lint,” but he was wrong. It was definitely a dead snake!

Cobble told News6 that a snake is “not something you normally find in there, but you find them,” adding that the family’s dryer didn’t have a certain grate that the appliances usually have to block objects from getting in.

“Could’ve been much worse, but I’m glad it was dead and done, fixed it up and ready to go,” Alyson said.

Watch the news report on the incident below.

This isn’t the first time the Pring family has made the news. In 2015, Alyson’s then-7-year-old son, Alex, was gifted a bionic arm from Iron Man himself, Robert Downey Jr. Alex was born with a partially developed arm.

Watch that story in the video below.