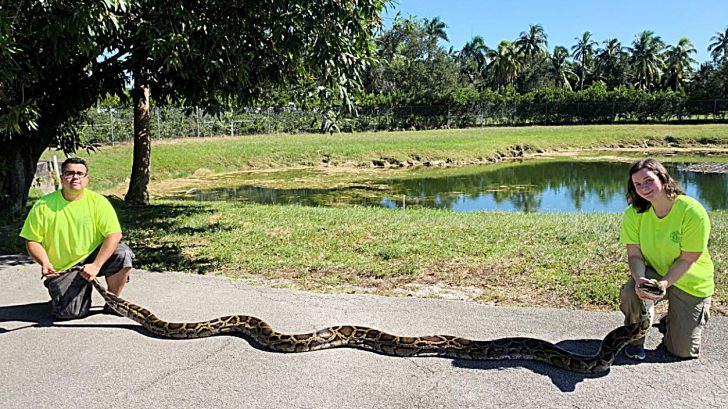 On September 22, 2019, Florida Fish and Wildlife Conservation Commission (FWC) trappers caught a record-breaking Burmese python that has been an invasive species taking over the Everglades.

Burmese pythons can grow to over 20 feet long. As one of the world’s largest snakes, these invasive, nonvenomous…

Posted by MyFWC Florida Fish and Wildlife on Monday, February 26, 2018

According to the U.S. Fish and Wildlife Service, nearly 100,000 Burmese Pythons were introduced into the U.S. from 1996 to 2006 as either illegal pets or legally taken to breeding facilities.

However, due to pet owners neglecting them and hurricanes destroying many breeding facilities, thousands of them have been released into the wild and have been flourishing on their own ever since.

One female alone can lay 30-100 eggs each year and the Everglades have been completely overrun by the pythons who are decimating the local species.

“There are tens of thousands of pythons in the Florida wild, attacking animals and damaging ecosystems – and the quest to stop them has become a collective crusade. The FWC has created an independent python removal squads in 2017 of hardy, civic-minded individuals who are skilled at capturing the non-native constrictors,” the FWC says about the Python Action Team.

Hopefully, Florida can rally enough people to help combat this invasive species and save the native animals. Check out the documentary video below about how pythons are invading Florida.