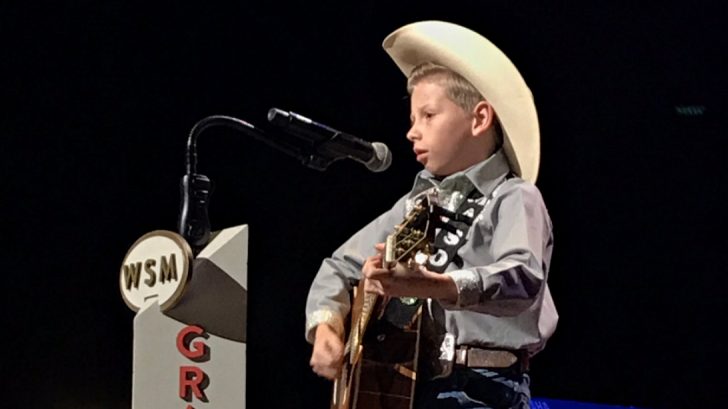 Some artists work their entire lives and only dream of the chance to sing on the hallowed Opry stage. Others earn the honor with the pure love they have for the music the Opry represents. Such is the case for 11-year old Mason Ramsey.

Also known as the “Walmart Yodeling Boy” or “Li’l Hank,” Ramsey skyrocketed to fame when videos of him singing classic Hank Williams Sr. tunes in his hometown Walmart went viral in 2018.

The videos captured the attention of Ellen DeGeneres who invited Ramsey to be a guest on her show last week. During his appearance he wowed the audience with his nostalgic cover of “Lovesick Blues.”

Following his performance, Ellen surprised him with the news that he would be making his Grand Ole Opry debut on April 14, 2018. And debut he did! When Mason stepped out onto the Opry stage, the crowd erupted, making for one of the most memorable welcomes in recent Opry history.

Seemingly unaware of the magnitude of his talent, Mason Ramsey began to strum his guitar and sing his most popular cover tune, “Lovesick Blues.” The crowd screamed and clapped as he began to sing the familiar lyrics. He bowed and tipped his cowboy hat as the crowd gave him a standing ovation at the song’s end.

Ricky Skaggs, Opry member and inductee of the Country Music Hall of Fame, joined Mason on stage and asked him if he had another song ready to sing. Without missing a beat, Ramsey starting singing another Hank Williams song, “Jambalaya.” Again, the crowd rose to their feet after his performance.

Ricky Skaggs then invited two members of the Opry management staff to join them on stage where they surprised Mason with a turntable and a collection of records from some of the Opry’s most beloved members. In addition, they presented him with a $5,000 college scholarship.

Mason Ramsey’s Grand Ole Opry debut is a moment you’ll want to watch over and over again.