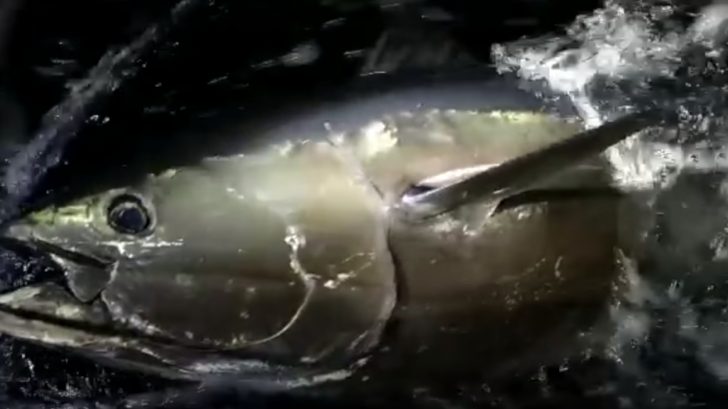 Simon Batey and his friends Jason Nott, Bradburey, and Andrew Alsop just caught the biggest fish that has ever been believed to have been reeled out of Welsh waters. It was a giant Atlantic bluefin tuna weighing a jaw-dropping 900 pounds.

Batey said he was fishing off the Pembrokeshire coast when he reeled in the 9ft sea monster, measured it, and released it back into the ocean.

Welsh waters are said to now have some of the biggest fish in the world now and many are campaigning to establish a fishery there to attract international fishermen.

Batey who is from Sarn, Bridgend, said he landed the bluefin while he was returning from fishing in the Celtic Deeps, which is an area of the Irish Sea about 30 miles off the west coast of Wales.

It took Batey and Nott an hour of struggling with the creature to reel it in while Andrew drove the boat. Batey and Nott said they had to pass the rod back and forth multiple times to keep from wearing themselves out but were eventually able to tire the fish out.

The Atlantic bluefin tuna was not pulled out of the water, however, it was measured from its nose to the fork of its tail, which is a globally recognized formula that gives the weight of the fish within a very close range.

“By far it’s the biggest fish caught in Welsh waters. The previous biggest was around 600lbs,” Julian Lewis Jones, a patron of Angling Cymru told BBC. “It’s no mean feat to catch a fish of this size, at that length it’s the same size as a big shark. They are immensely powerful and not something any novices could even try, so it had to be a team effort.”

Once the bluefin was pulled close to the boat, it was slowly towed to ensure a regular supply of oxygen to the gills before being measured at 111-inches and then released.

“It’s very exciting that a fish of this size has been caught in Welsh waters. We now have some of the biggest tuna in the world swimming in our waters,” Jones added.

Jones went on to say that the temperature of the waters in Wales is fantastic for marine life and if it’s managed correctly, it will be a “world-class” recreational catch and release tuna fishery for many generations to come.

“Every year we are seeing more tuna and they are returning and we want anglers to come here from all over the world. As fishermen we are guardians of the marine habitat and have a passion for conservation and the environment. We have been working with researchers at Swansea University because we want marine life to thrive. A catch and drop fishery could be managed, sustainable and bringing socio-economic benefits to the area.”

It’s said that the giant Atlantic bluefin tuna disappeared from UK waters during the 1960s due to commercial overfishing and changing climate. However, lately, the species has been spotted feeding in large numbers between the months of July and December.

See Footage Of The 900-Pound Atlantic Bluefin Tuna Below