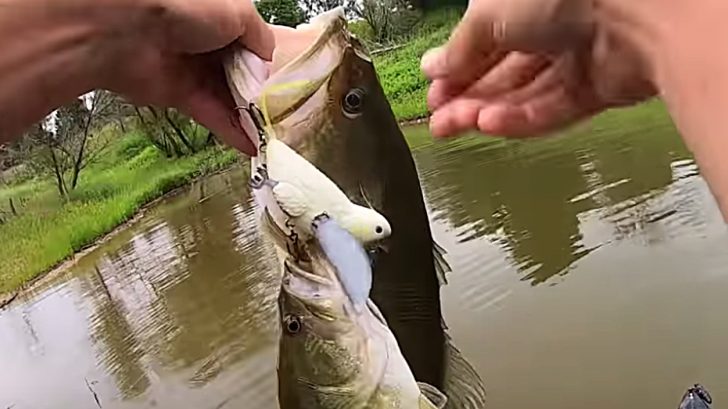 Fisherman and YouTuber, The Fish Whisperer, shared a video of a fairly rare moment caught on video of him catching and reeling in two fish with one lure.

The experienced fisherman said it was the very first time he had ever caught two fish at the same time with one cast. He was sitting in his kayak on some unknown lake using a top water bird lure as bait to attract bass.

The Fish Whisperer said in the video after realizing he hooked two fish, “Oh my gosh, I got two on here. There’s two! You’re kidding me. Well…that’s the first time Ive ever done that. That is insane.”

Both the fish were bass, the bigger one weighing about 3 pounds and the other one a little under. The Fish Whisperer carefully lifted them out of the water in front of the camera and gently removed a hook from the bigger fish’s mouth.

He let the animal go by tossing it back into the water and then proceeded to take the hook out of the other fish’s mouth and do the same with it.

The Fish Whisperer uploaded the footage back in May 2020 and the double catch happens around the 2:50 mark of the 10-minute YouTube video.

Watch The Footage Of The Double Fish Catch Below