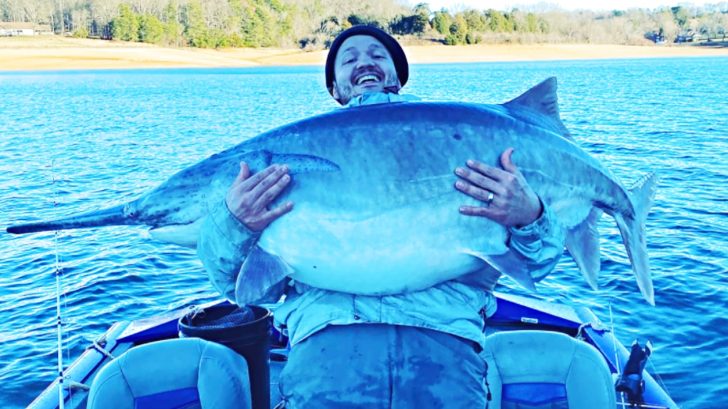 A Morristown man pulled in a monstrous paddlefish at Cherokee Lake over the weekend of January 23, and he suspects that the fish might have set a new state record.

Robert Livingston of Morristown, Tennessee told WVLT news that he felt like he was reeling in a car when battling his catch at Cherokee Lake. According to the Tennessee Wildlife Resources Agency, Livingston would have needed to top the previous lake record of 104 pounds, set back in 2016.

While Livingston took plenty of video documentation of the catch, the fisherman ultimately decided to let the fish go back in the water. Because Livingston wanted the fish to live, he did not weigh the paddlefish, but the fisherman claims that he believes the catch broke the previous record. On Facebook, Livingston wrote:

“The Tennessee state record snoonbill is 104lbs well I blew that out of the water! The world record is 151 lbs I don’t know if it was more but it sure felt like it!! No I didn’t weigh it we had no way to even try and I wasn’t going to let I die because I wanted to be put in the record books!”

Watch the full video of the catch below!

The gigantic fish is still swimming around in Cherokee Lake for fishermen hoping to land the next official record! Learn more about why paddlefish and why they are “living fossils” in the video below.