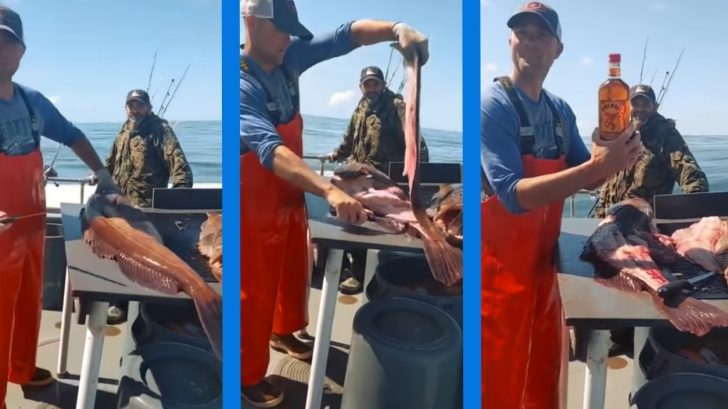 A video has recently surfaced on social media over the past few days showing the astonishment of a fisherman after filleting a fish and finding a full, unopened bottle of Fireball Whisky inside it.

The video first appeared on TikToker Ben Bani’s page, and it looks like it was a guy’s fishing trip out on the open ocean. The men were standing around on the boat after they had just caught a bunch of fish and a couple of the fish were on a table ready to be cleaned.

One guy films the video as the rest of the men stand around and watch one man fillet the fish. The fish are massive, looking to be about three feet or so in length and he cuts down the side of one of them.

He pulls off a slab of meat and as he gets to feeling around the fish’s body, he feels something inside its stomach. He then cuts the fish’s belly open to find that there’s a full bottle of whisky in there.

Sincerely surprised, he grabs the bottle, holds it up in the air to show the men around him and says, “Jackpot!”

The other guys smile and laugh and one can only wonder how it could have possibly got there. Obviously, if the fish really swallowed the bottle in the open ocean then that’s horrible.

Pollution is a major problem today affecting the oceans worldwide and spreading awareness about it is key to cleaning it up. Hopefully, with everyone taking action, we can see cleaner oceans as we move forward into the near future.

Another theory, and probably the most likely cause for the bottle being there is, maybe one of the men on the boat stuck it in the fish’s mouth after it had been caught to play a joke.

Check Out The Video Below Of The Fireball Whisky Fish