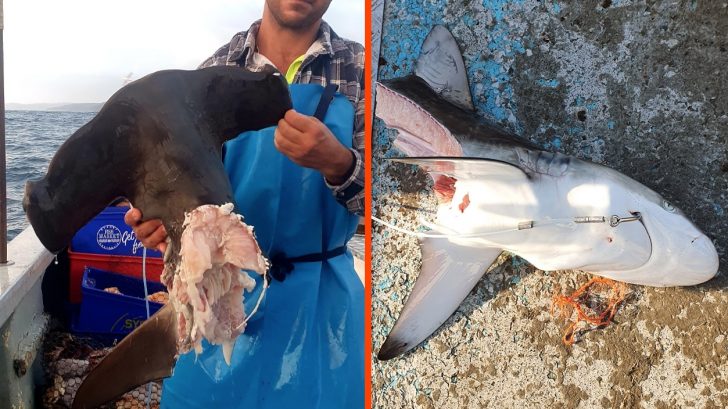 WARNING: This article may not be suitable for all readers.

According to a New South Wales fisherman who was fishing off the coast of Australia, it’s way easier to get a shark on the hook than it is to reel a whole one onto the boat.

Photos shared to the Facebook page Trapman Bermagui showed several photos of half-eaten sharks that were caught by the fishermen but never made it back to the boat in one piece.

Each shark was apparently bitten by a much larger shark as it was getting reeled onto the boat. Professional angler Jason Moyce can be seen holding up a hooked bronze-whaler and two hammerheads he captured on the southern coast.

Jason told 9 News that he gave up the hunt after catching the third shark and it came back half-eaten.

“There were just too many big ones,” Jason wrote on Facebook, explaining that he has a quota to catch smaller shark species.“They were down deep, I couldn’t see them but I think they were tiger sharks.” He said he wasn’t surprised of the situation because it “happened lots of times in recent years.”

Jason said that it is not uncommon for sharks to follow the boat because they know they may end up with an easy source of food. He believes in most of the cases where his catches were half-eaten, he believes they were eaten by a tiger shark and great white.