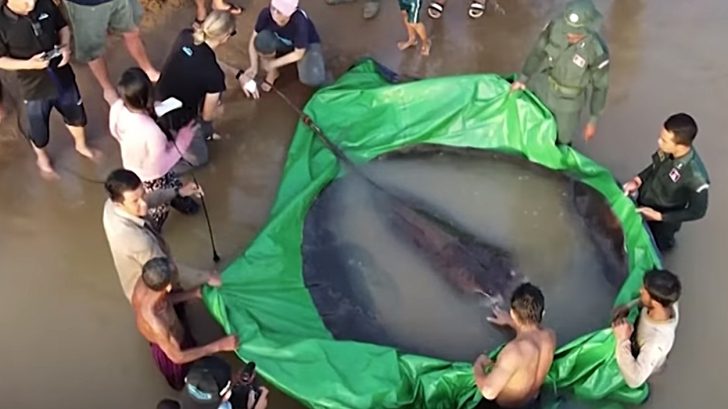 42-year-old Moul Thun caught the world’s largest freshwater fish ever recorded being caught and that bad boy was 13 feet in length and weighed a whopping 661-pounds.

The fisherman hooked a giant freshwater stingray near a remote island on the Mekong River in the Stung Treng area which is located in northern Cambodia.

A group of researchers from the Wonders of Mekong research project helped tag measure and weigh the ray before it was released back into the river to continue its life in the wild.

Scientists say that relatively little is known about the giant stingray and they are hoping the tag, which emits an acoustic signal, will allow researchers to track the fish’s movements so they can learn more about its species’ behavior.

The catch “highlights how little we know about a lot of these giant freshwater fish,” Zeb Hogan, a fish biologist at the University of Nevada told NBC. “You have a fish that’s now the record holder for the world’s largest freshwater fish, and we know little about it.”

The fisherman, Moul Thun, said he caught the giant stingray with a simple hook and line on the evening of June 13 (2022) and then contacted researchers the following morning.

Researchers working with the Wonders of Mekong happened to already be in the area installing receivers that track the migratory patterns of fish in the river.

“It’s a particularly healthy stretch of the river with a lot of deep pools — pools up to 90 meters deep,” Hogan, who is also the host of National Geographic’s “Monster Fish” television series told NBC. “We started focusing on this area as a stretch of river that’s particularly important for biodiversity and fisheries, and as a last refuge for these big species.”

Hogan said he and the team have been contacted with local fishermen asking them to notify them if they catch something significant and this giant stingray was exactly the type of thing they were hoping to get a call about.

The fisherman who caught the giant stingray was said to have been paid market price for his catch and it was the third giant freshwater stingray recently caught in the area. All fish were released back in the river.

See Footage Of The Giant Stingray Below