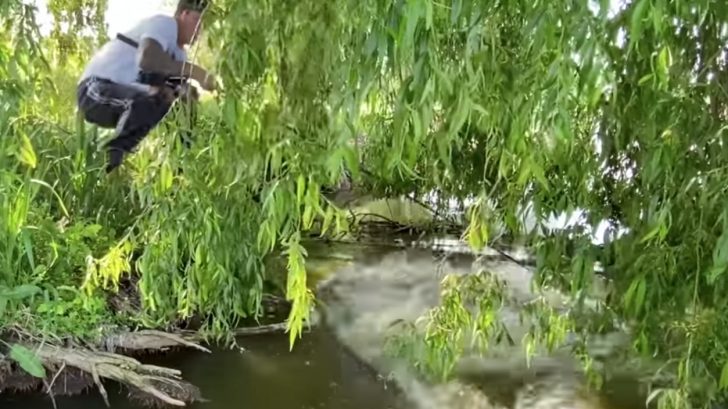 Mr. Szabo was filming himself fishing at a lake in Somogy County, Hungary when he was pulled into the water by a massive 145-pound fish.

He was at Lake Harasberki and the video footage showed him kneeling at the riverbank under some trees, staring at his bobber in the water. Attached to that bobber was his fishing line that was connected to his rod sitting next to him.

After a few seconds of watching the bobber, it abruptly disappears into the murky green water and Szabo quickly grabbed his fishing rod. Right from the beginning, you could tell that the fish was strong.

Szabo tried to hold on to the pole and pull the fish onto the bank but it was too strong for him. The fish thrashed around in the water before taking off into deeper parts of the lake.

Szabo didn’t want to let go of his fishing pole so he had no other choice but to get dragged into the lake.

As he was forced into the water, he ended up losing his rod and was seen on video scrambling out of the lake, grabbing his phone, and walking along a bridge before grabbing his phone and cutting the camera off.

Szabo said that it took him almost an hour to find his fishing rod but when he did, he was able to finish reeling in the massive 66kg (145lb) fish.

“The line got stuck, so the huge fish pulled me into the water. Later managed to catch, it was 66kg,” Data Dot Coaza reported Szabo saying.

The fish was said to be a Wels catfish which can grow up to 440 pounds. The largest Wels catfish ever recorded in the area was a colossal 880 pounds.

Watch Video Of Fisherman Getting Dragged Into Lake Below