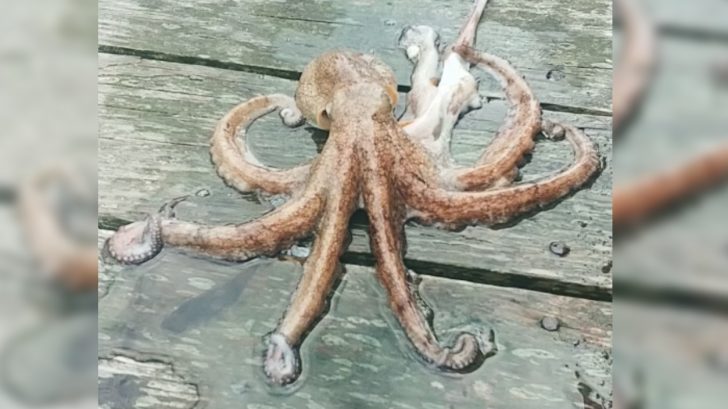 Jennette’s Pier in Nags Head, North Carolina shared a fascinating video of an octopus that a fisherman caught while he was fishing on the pier.

The video showed the they’re technically arms creature sprawled out across the wooded deck in a puddle of water crawling around and reaching out with its arms probably trying to figure out how to get back to the ocean.

Bystanders watched and you could hear a motherly figure in the background tell children to look at the octopus. The fisherman then began to explain that he had seen about 50 caught out on the pier but they were all smaller than this one.

After getting it off the hook and letting the people watch it for a moment, he then released the octopus back into the ocean where it can live out the rest of its days.

“This #OCTOPUS came over the rail today after getting hooked on a drum rig. It surprised (the) angler and #onlookers,” Jennette’s Pier posted on Facebook.

According to wildlife experts, the species was said to have been an Octopus Vulgaris, which is a common octopus that can grow up to 36 inches, weigh up to 22 pounds and grow an arm back if it gets ripped off.

“They also have beaklike jaws that can deliver a nasty bite, and venomous saliva, used mainly for subduing prey,” the site reports, according to National Geographic.

Watch Footage Of The Octopus Below