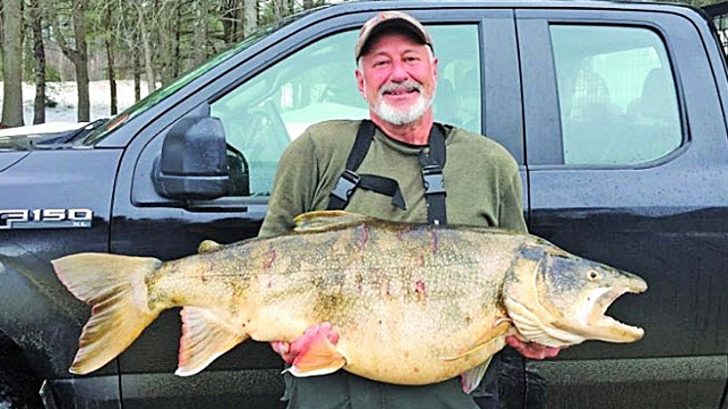 On February 25th, experienced angler Thomas Knight from Meredith, New Hampshire reeled in the largest lake trout in the state’s history while fishing on Big Diamond Pond in West Stewartstown.

The last state record for catching the largest lake trout was set in 1958 and it weighed 28 pounds. Ever since then no one has been able to beat the record, that is until Thomas caught one that was far beyond the biggest. He said he battled this fish for a long time and being a well-educated fisherman he knew when he reeled it in it was a record-breaker.

After getting it out of the water Thomas called Andy Schafermeyer, a fisheries biologist who works at the New Hampshire Fish and Game Department to verify the fish’s size and certify it as the state’s new record. When they got the fish to Andy and put it on the scales the two officials weighing the fish said it was the largest one they’ve ever seen before.

Thomas Knight of Meredith caught an enormous lake trout while ice fishing in northern New Hampshire. The fish was…

They put it on a scale meant to measure fish up to 30 pounds and it overloaded the scale. They knew they had to find a bigger scale so they drove around until the found a packaging company that had a state-certified scale to measure the fish.

They put it on the scale and it weighed an impressive 37.65 pounds, measured over 40 inches long with a 27-inch girth. Andy believes the fish is somewhere between 50 and 60 years old.

“Most state records, when bested, are done so by only a few ounces. Knight’s fish shattered the old record by over 9 pounds,” Andy told CBS NEWS. “This fish is now the largest lake trout caught in all of New England.”