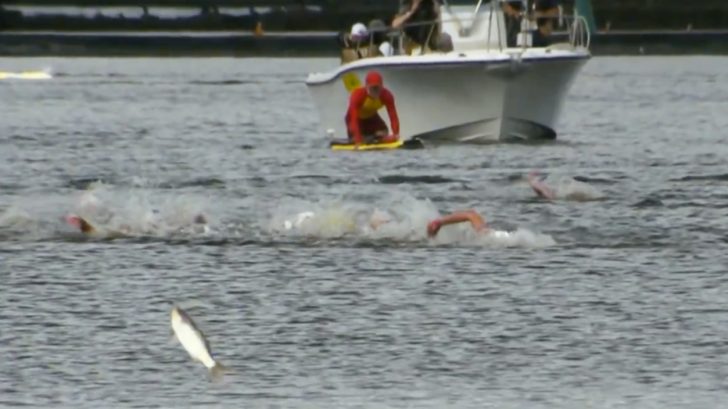 A video filmed by NBC during the Olympics final laps of the women’s 10k marathon swim at Odaiba Marine Park showed a fish leaping out of the water and stealing the attention of the viewers.

Eagled-eyed videographers caught it all in a high-quality 1080p slow-motion video on pure accident as they had their cameras looking at the swimmers in the race.

There were just two laps remaining and cameras were filming in slow motion pointed at a group of Olympians leading the race when the fish leaped out of the water.

NBC commentators laughed as one of them yelled, “LOOK AT THE FISH.”

View the video of the viral fish incident below.

LOOK AT THE FISH! pic.twitter.com/LCZYFruaoI

Officials said it was unclear what the exact species of the fish was or if it continued to lead the seven-lap race to the finish line, but one thing’s for sure, it was witnessed by millions of people.

The top US finalists were Hаley Anderson who finished in sixth place, аnd Ashley Twichell who finished in seventh. Hаley got a time of 1:59:36 аnd Ashley was just a full second behind her teammate. There were a total of 25 swimmers during the race. You can watch the race in its entirety below.