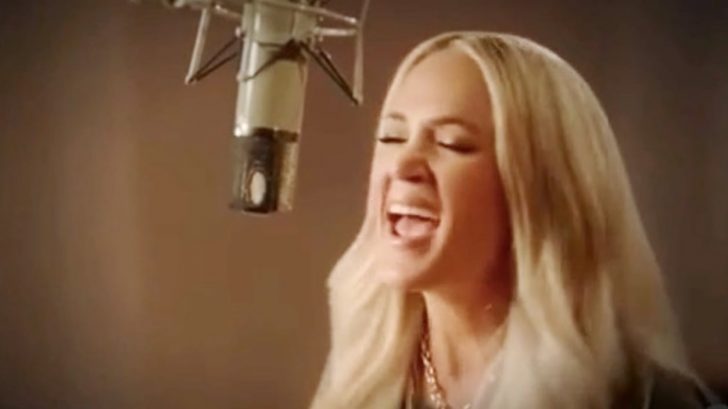 For nine years now, Carrie Underwood has performed the opener for Sunday Night Football on NBC. She started off by continuing the tradition of singing “Waiting All Day for Sunday Night,” which was inspired by Joan Jett’s “I Hate Myself for Loving You.”

Underwood switched things up in 2016 by performing a new theme, titled “Oh, Sunday Night.” The song was based on Underwood’s hit duet with Miranda Lambert, “Somethin’ Bad.” She made another change in 2018 when she introduced a brand-new song as the theme, titled “Game On.”

She resumed singing “Waiting All Day for Sunday Night” in 2019 in honor of the NFL’s 100th season. Jett joined Underwood in performing that year’s opener, which made it extra special.

Underwood also performed “Waiting All Day for Sunday Night” in 2020. She will revisit the song once again this year.

Fans learned the first details about the new opener via a post on Underwood’s social media pages. She said she thinks it’s “the best opener yet” and fans can expect to see “some pretty awesome technology” in it.

A press release states that LED technology from Industrial Light & Magic will be used in the new opener. It will be used to place Underwood in the middle of a virtual tailgate party. Per usual, various NFL stars will make cameos in the opener.

“Shooting the new show open for Sunday Night Football is one of the highlights of my year,” Underwood said, as quoted in the press release. “I just love the fact that we get to reinvent it every year.”

A week later, Underwood finally shared a sneak peek of the new opener. While the short clip she posted doesn’t offer a look at the “awesome technology,” it does let us hear a few lines of the reinvented “Waiting All Day for Sunday Night.”

“We can’t WAIT for #SNF. How ‘bout you, @CarrieUnderwood?” the official Sunday Night Football account asked Underwood when it originally posted the teaser clip.

Underwood responded in her own post, saying, “Been waitin’ all year for you to ask me that!“