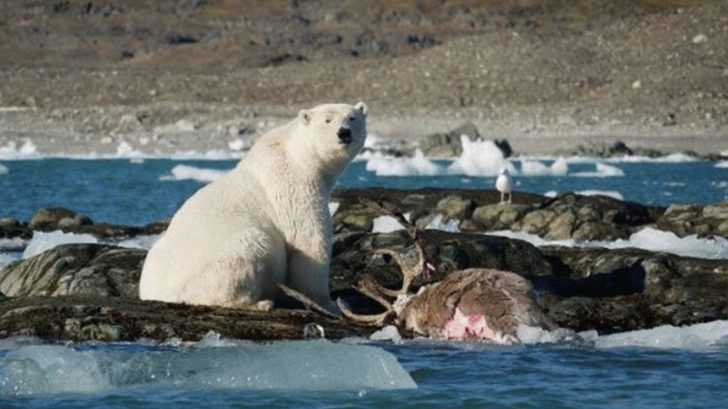 According to the scientific journal Polar Biology, a polar bear has been caught on camera chasing down a reindeer for the first time ever officially recorded.

The video was filmed on August 21, 2021 close to the Polish Polar Station in Hornsund, which is located in a part of the Svalbard archipelago in northern Norway. Scientists say it’s not an incident they believe has never happened before, it’s just one that has never been filmed before.

The journal said when the female bear was first spotted near the station, the scientist made a lot of noise to scare it away but the bear disregarded them. Instead, the bear kept lifting its head up and intensely sniffing the air before it walked towards five reindeer that were grazing close to the coast.

The bear slowly crept up on the herd without them noticing before it charge at a large male reindeer that, in an attempt to get away, ran into the nearby water. However, polar bears can swim faster than deer and followed the animal into the water.

At about 80 feet from the shore, the polar bear caught up to the reindeer and continuously bite, clawed, and submerged the deer in the water and eventually killed it. The bear ended up bringing the reindeer back to the shoreline, dragged it up onto dryer land, and then began feasting on its freshly caught meal.

Within two hours, the polar bear ate most of the meat on the reindeer, while occasionally scaring away hungry Arctic foxes and seabirds wanting to join in. When it was done, the bear took a 12-hour nap and then returned to the carcass to munch on what was left.

Polar bears usually hunt seals, but scientists say with air and sea temperatures warming, it’s causing ice to melt near the coast and forcing polar bears to be driven inland to hunt for food. Unfortunately for the Svalbard reindeer, they are easy pickings for the apex predator.

The reindeer are not used to dealing with a polar bear and because of that, “the level of alertness observed among Svalbard reindeer is very low. When selecting feeding and resting sites, they appear to underestimate the risk of a bear attack,” according to the journal paper.

As of now, it is unclear how this shift in polar bears going after land-based prey will affect the ecosystem on a wider level. Fortunately, the reindeer numbers in the area are set to increase so there’s a very low risk to polar bears depleting the reindeer population.

Watch Footage Of The Polar Bear Vs Reindeer Below