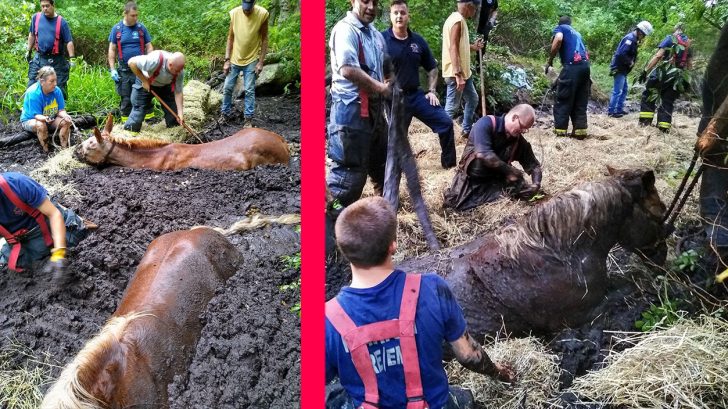 A horse and a mule are extremely lucky to be alive after finding themselves trapped in the mud for several hours in Marion, Massachusetts.

On August 16, 2020, the Marion Fire Department received a call for help and dispatched multiple teams to the scene. Upon their arrival, they immediately set out to rescue a mule named Girlie, and a horse named Tick who were both trapped neck-deep in a “quicksand-like mud.”

Due to the weight of the mud closing in, the two animals were both having a hard time breathing so rescuers immediately started digging the mud away, but it was no small task. Using straps, pulleys, and multiple other tools, the firefighters were finally able to free the four-legged animals from the mud.

The Marion Fire Department later gave an update via Facebook on the condition of both animals:

“We are pleased to report that both animals are recovering and doing well at this time. Special thanks to all the members of the department who worked tirelessly in this effort.”

The owner, Stephanie Davis, commented on the post and expressed her gratitude to the Marion Fire Department.

“Thank you thank you thank you for all everyone did to help our horses here–above and beyond, dealing with the quicksand-like mud, digging away the mud so they could breathe–you all are real heroes. Thanking you with all my heart.”

For more incredible animal rescues, check out the video below.