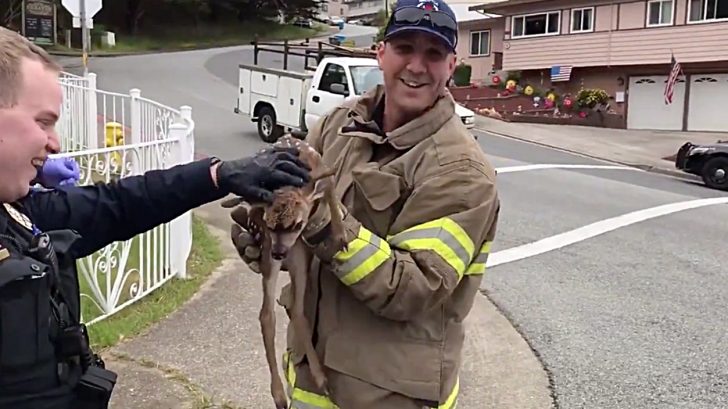 During a recent heavy rain in North County, San Diego California, a baby deer was looking for shelter and ended up getting itself caught in a storm drain. Luckily, it was still very much alive and yelling for its mother who was nowhere to be seen.

Someone heard the deer and called the local authorities who quickly arrived to help the poor thing. A video shared on Twitter by the North County Fire Authority showed a firefighter and two Pacifica police officers attempting to get it out.

As the firefighter reached down into the tight and narrow drain, the other police officers stood beside him ready to assist. Realizing the space was too small for the fawn to fit through he had to slide the little deer down to the other end of the drain that had a bigger opening.

He carefully pulled the fawn out of the drain. With the white spots all over its back, you can tell that the little deer may have just been born or was only a few weeks old.

The men got a lot of praise from people on social media and news outlets once the video was shared on Twitter. You can watch the video yourself below!

A great team effort with @PacificaPolice today. Our firefighters along with PD were able to rescue a fawn caught in the storm drain on the corner of Crespi and Barcelona.