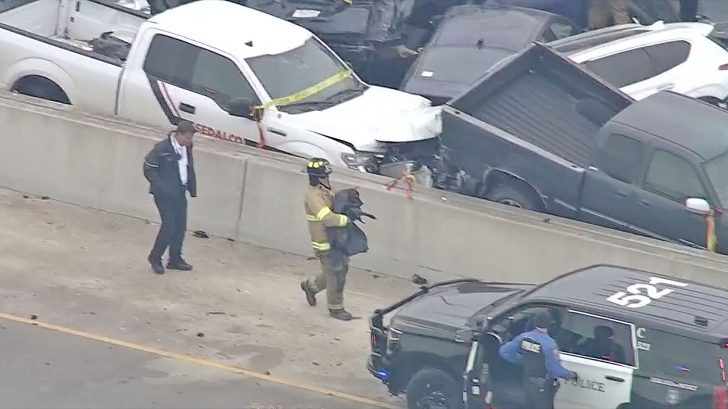 A Fort Worth firefighter helped rescue a dog that was trapped in a truck hours after a multi-vehicle pileup left five people dead on Interstate 35W in Fort Worth, Texas.

The massive pileup which happened around 6 a.m. involved around 100 vehicles on February 11th, 2021. With 5 people confirmed dead and countless others injured, the extent of injuries and damage is still being determined.

As emergency response crews continue to battle the severe weather conditions, one video shows a firefighter rescuing a trapped dog out of the back of a black truck stuck between multiple cars. The dog remained calm knowing the firefighter was there to help. Once removed from the wreckage, the dog was placed in the back of a Fort Worth Police Department vehicle and taken to a nearby shelter.

Preliminary information on MCI in Fort Worth. More info will be released later. At least 100 vehicles involved, 5 fatalities, 36 transported to local hospitals. #yourFWFD continues to work the incident and will be on scene for several hours. pic.twitter.com/DUtRJFKSI9

It was later confirmed that the dog was uninjured and successfully reunited with its family.

Watch the video of the rescue below.