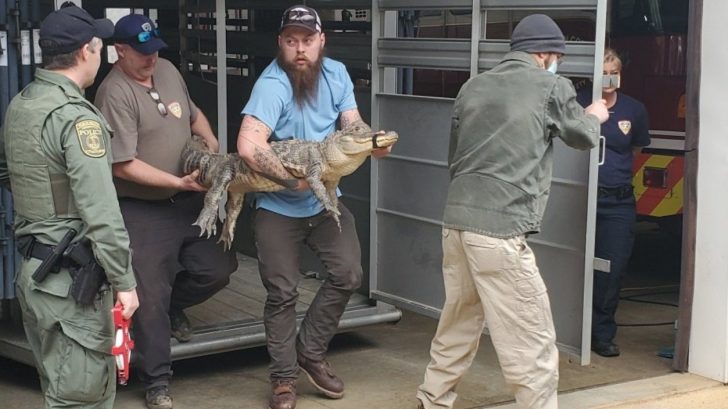 Franklin County Department of Public Safety shared a few photos on Twitter of some animals they had to remove from a home after it caught on fire.

The department wrote that they were responding to a phone call on Friday and after they arrived and entered the home, firefighters found Smiley, a 12-year-old alligator.

According to ABC 13 News, the residents of the home said they’ve had the gator as a pet for about 8 years. Along with that reptile, the family also had two black snakes, a copperhead, and a python.

Billy Ferguson, the Franklin County Public Safety Director said there was even a couple of turtles found in the home that the family was keeping as pets. It was a big surprise to the the firefighters who had to wrap the gator’s mouth and carry it out of the home with the other critters.

The department shared a few photos that they took on their official Twitter page FCDPS. It showed two men carrying the 6-foot gator to be transported to a hospital and be treated for any medical reasons. It will be relocated to a natural habitat.

View More Photos The Alligator Below

@fcdps resources responded to a residential fire yesterday and found a 6 foot alligator in the home. Today “Smiley” was turned over to a rescue group and after medical test will be placed into a natural habitat pic.twitter.com/ZBlkoiCHf9