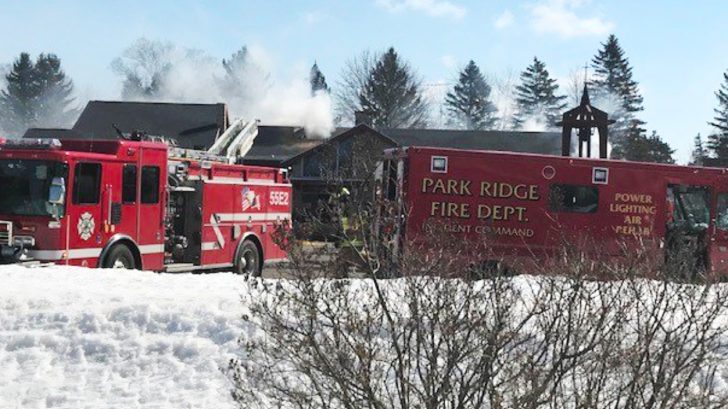 Less than 24 hours after The Springs United Methodist Church in Plover, Wisconsin held Sunday worship, the beloved church was engulfed in flames.

According to WSAW, firefighters arrived on the scene around 11 AM and saw some smoke.

“That changed rapidly,” Deputy Chief Ken Voss with the Plover Fire Department said. “We were able to get in quickly but we had heavy smoke and heavy fire so we had to back out.”

According to a tweet from news reporter Kassandra Sepeda, the Fire Chief called the fire a “total loss.”

While the church was a total loss, there was something that remained unscathed – a 150-year-old bible.

Not only did this bible survive this devastating fire, but it also survived a fire that destroyed St. Paul’s Methodist Church in Stevens Point, Wisconsin on Easter Sunday in 1959.

“This bible has survived two fires, in two different churches,” Pastor Tim O’Brien said. “We can’t open it anymore because of its age, but I think it’s a great testament to our faith that still stands strong. ”

Although they don’t have their church anymore, they will continue to worship at another location while their Board of Trustees decides how to move forward.

Our United Methodist community has been deeply saddened by the unexpected fire this week at The Springs in Plover. The…

A woman named Mary took to Twitter to express her sadness over the destruction of the church, revealing she has been the pianist since 2007. She shared two photos of the inside, saying, “Our beautiful Springs United Methodist church is on fire. So so sad.”

Our beautiful Springs United Methodist church is on fire. So so sad. I’ve been the pianist since 2007. pic.twitter.com/swQD1shQAP

It is unknown what caused the fire, which started in the church’s attic. Luckily no one was inside when it did.

Watch the WSAW news report about the “miracle” bible.