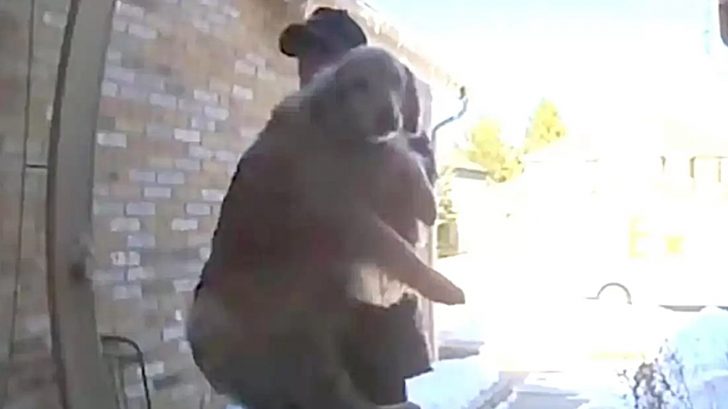 Lisa Menzies and her husband from Castle Pines, Colorado said they were out of town one day when they got a call from a really nice FedEx driver about a very special delivery.

Lisa’s told FOX31 Denver that while she was gone, a contractor came over to the home and when they closed the front door, it did not secure all the way and the wind blew it open.

At that point, their adorable Golden Retriever named Catcher saw it as an opportunity to go outside and explore the neighborhood.

“We were getting some repairs done on the house,” Lisa told FOX31 Denver. “Our contractor left to go to lunch and shut the front door, and the wind blew the door open while I was gone, and Catcher escaped.”

Catcher’s owner said she didn’t blame her for wanting to wander outside after being cooped up in the house all day. The RING doorbell security camera captured the moment Catcher stepped outside and began wandering off.

Fortunately, it wasn’t long after that she received a call from a FedEx driver who said he spotted her roaming around and had her in his van. The good samaritan then offered to bring her to the address he saw on her dog collar.

In an exclusive interview with FOX31 Denver, Lisa said, “He just said, ‘I found your dog, and the address on her tag is where I’m going to take her,’ and then he put her in the house with such care.”

Video footage showed the FedEx driver carrying Catcher in his arms as he walked to Lisa’s front door and placed him back inside the home, while securely closing the door.

“He was taking such care and love with her that it was really amusing,” Lisa said. “He interrupted his day and his package delivery schedule to pick her up and hand-carry her into our home and lock the door behind him. I don’t want to think about where else she could have ended up,” the thankful pet owner said.

Watch Interview With Pet Owner Below