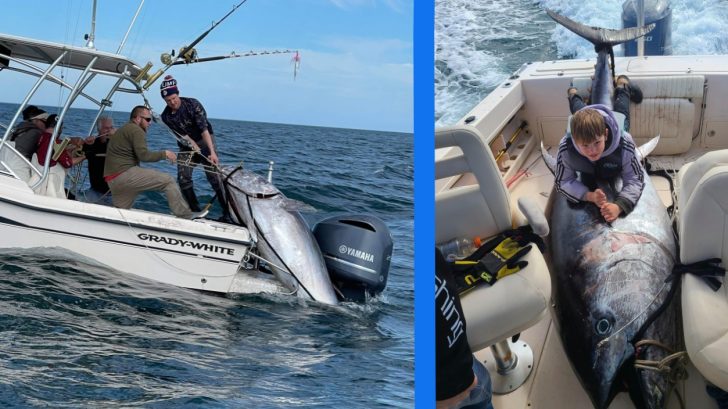 Josiah VanFleet and his son Zeke were on board their 22-foot Grady-White boat with three other friends when they hooked onto a nearly 10-foot fish.

The group was fishing 45 miles off the coast of Outer Banks in North Carolina at around 8:15am when a monster bluefin tuna fish took hold of their bait. The reel was making a ton of noise so they knew they had something big on the other end of the line. However, everyone was very surprised to see it was a gigantic 1,000-pound fish.

They stepped up to rod and reel to take on the challenge.

“When we were reeling the fish in, about three-quarters of the way through, our reel actually broke, and it would no longer turn. And so we had this 1,000-pound fish on the line. And we actually had to take another reel, tear off a ton of line real quick, and re-crimp both those lines together all while the fish was on there. It was insane,” said Josiah.

They struggled for two hours but not once did they think about giving up the opportunity to reel in this 10-footer. Even if meant battling the monster all night, Josiah said they were prepared to do it.

After a long hard fight, they were finally able to pull the fish onto the boat, and by the look of the pictures, it could barely fit. Excited, they drove it back to shore where it could be certified by officials who measured it out to be 114.5 inches long.

Josiah said, “I had no idea – I was not expecting on catching, like, an almost 10-foot-long fish. I mean, I just never dreamed of it.”

Watch Footage Of Catching The 10-Foot Tuna Below