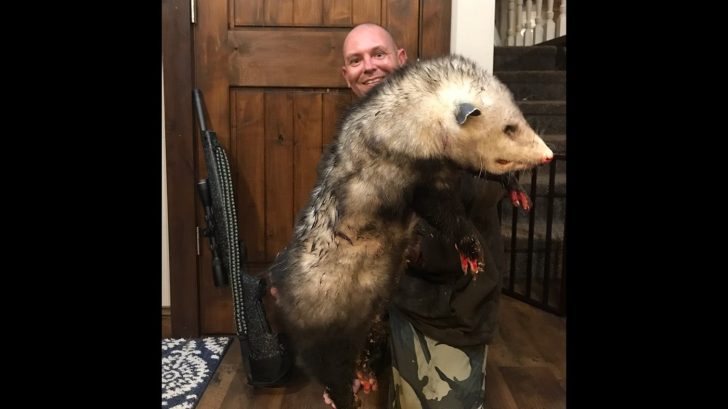 Hunter, husband, and father to five beautiful daughters, Dan Antilla from Linwood, Minnesota shot down a giant opossum after it got onto his property this past November.

The massive oversized marsupial had been breaking into his chicken coop during the night and stealing eggs for several weeks before he figure out it was a opossum. At first, he kept finding large holes in the fencing and wasn’t one-hundred percent sure what was making them.

“I thought it was a fox, but it was weird that the chickens weren’t disappearing,” Dan told Field & Stream. “I was getting so mad that the chickens kept getting out and up onto my patio and pooping on it. I finally went and wrapped a new set of chicken wire around the bottom of the coop.”

Even with Dan’s efforts to keep wildlife out of his coop, the opossum still found other ways to get into it. It normally raided the coop during the night when it was too dark outside for anyone to see him but this time the sun was about to set and the egg thief came back. His wife happened to spot it and freaked out about it to him.

Dan said, “She was yelling to me ‘there’s a huge possum out here! Get rid of it.’ I ran and grabbed my .22. I ain’t gonna lie, when I opened up the door and looked over at the chicken coop, I was like ‘holy cow, it looks like a little bear!”

According to Minnesota state law, opossums are considered a legal small game species to hunt and in Dan’s town, landowners may discharge firearms near buildings they own as long as they follow state and local regulations.

“By then, [the possum] was on the backside of the coop, about 65 yards away. I steadied up on the patio and hit it right behind the shoulder two times, and it took off running. It made it about 50 yards before it died.”

Dan and all five of his daughters, Summer, Brooklyn, Avery, Esmae, and Jaida followed the bloody trail to the dead opossum. By the time they got to it, it had crawled deep underneath Dan’s inlaws shed.

He used a rod with an old Rapala lure to hook and drag the dead opossum from beneath the crawl space, but it ended up getting stuck halfway through. Dan’s 15-year-old daughter Summer braved up and said she would crawl under there to get the dead animal, and so she did and they all went back to the house with it.

“Let’s just say the whole family was happy…except for my wife, who didn’t want it inside the house,” Dan said.

The opossum weighed a whopping 14 pounds and 2 ounces which makes it way heavier than a normal opossum. According to the database in Minnesota, the largest one the state has ever recorded was 16-pound, 2-ouncer killed in 2016.

“I’ve caught seven opossums this year. I picked them up live and brought them back away from the coop to the back and let them go. They play dead, and I’ll let the kids pet them before getting rid of them. But this one was different,” Dan said. “I’m going to get it mounted on a log that I’ll put up high, so it’s like the possum is coming down and trying to eat you.”

Watch Footage Of Another Opossum Getting Into A Chicken Coop Below