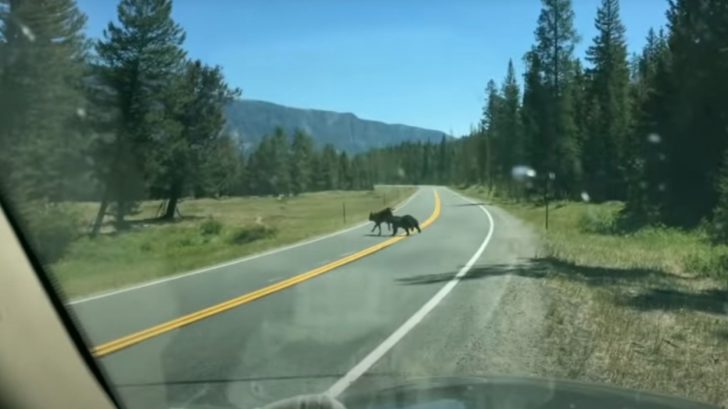 Grizzly bears can be very dangerous. Their superhuman physical strength adds up to their strong biting power, and they can break a body in half in a matter of seconds.

Blake Clark, a man driving in his car down the road in Crandall, Wyoming filmed a rare scene of an aggressive grizzly chasing a cow. The cow probably got lost from the farm and walked down a road near Yellowstone National Park where he encountered the hungry grizzly bear.

The video footage showed the livestock running for his life with the predatorial beast hot on its trail. It took the grizzly just a few seconds to catch the cow and jump on his neck to bite him. The cow tried to resist the attack but the grizzly was stronger.

After putting the cow down, the grizzly bear attempted to split his leg and start eating him. Clark tried to help the poor cow escape by honking several times. He hoped to divert the attention of the hungry grizzly from the cow for a few seconds. His attempt worked shortly until the cow was able to stand up again. Unfortunately, the hungry bear ended up dragging the cow off into the forest.