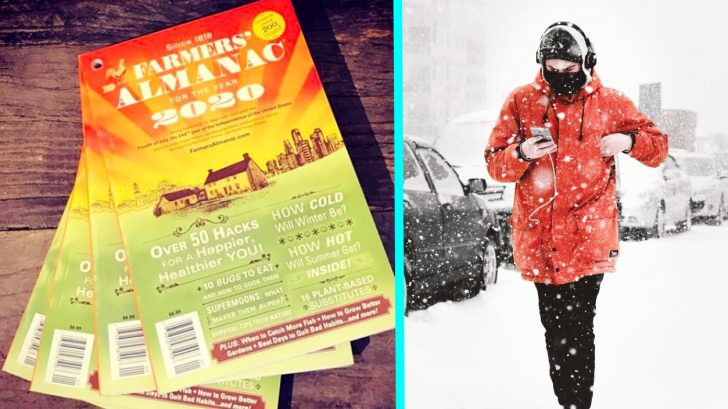 Last winter, parts of the U.S. experienced record low temperatures when a polar vortex consumed the country. After that chilling experience, the hope was that this year’s winter would be more mild.

But the Farmers’ Almanac has some bad news for you.

The annual periodical, which has published weather forecasts since 1818, is relied on by those who want an idea of what the weather may be like throughout a given year. And its predictions often turn out to come true.

Freezing. Frigid. Frosty. That's what you can expect this winter if you're in the United States, according to the Farmers' Almanac. https://t.co/i9YWvlHptX

On Monday (August 26), the Farmers’ Almanac released its extended forecast for the 2019-2020 winter season. If the Almanac‘s predictions come true, it looks like the U.S. is in store for yet another brutal winter this time around.

According to a press release, the Farmers’ Almanac is predicting a “polar coaster winter,” describing the season as having the potential to be “freezing, frigid, and frosty.”

In that press release, the publication’s editor Peter Geiger says that in addition to being bitterly cold, the winter may bring in a lot of snow, saying there is the potential for “hefty snowfalls.”

❄️☃️?BREAKING: We've released our extended forecast for WINTER 2019-20! See who's in for a wild ride on the #PolarCoaster!
? https://t.co/6IKGHYKgYI#WintersComing#FarmersAlmanac#Winter2020#winterwx#snowride pic.twitter.com/nt0cBdQBOH

The intense winter weather is predicted to affect two-thirds of the U.S.

The Almanac says the Midwest and Northeast will get the worst of the cold weather and the precipitation, with “above average” rain/snowfall being possible.

January is predicted to be the worst month of all. The Almanac predicts that parts of the Midwest will be left to deal with temperatures as low as negative 40 degrees Fahrenheit.

As for the Northeast, the Almanac says folks living there should prepare for “copious amounts” of snow, rain, and sleet within the first few weeks of 2020.

BAD NEWS: A very harsh winter is coming, according to the 2020 Farmers' Almanac. ??? DETAILS: https://t.co/Skc1eFPIFK pic.twitter.com/xedHZbEElf

While these are just predictions, the Farmers’ Almanac tends to know what it’s talking about. Last year, it predicted chilling conditions for the winter, and it was right on the money.

Do you often read the Farmers’ Almanac? If so, do you find that its predictions are spot-on? We secretly hope its forecast for this winter doesn’t come true!