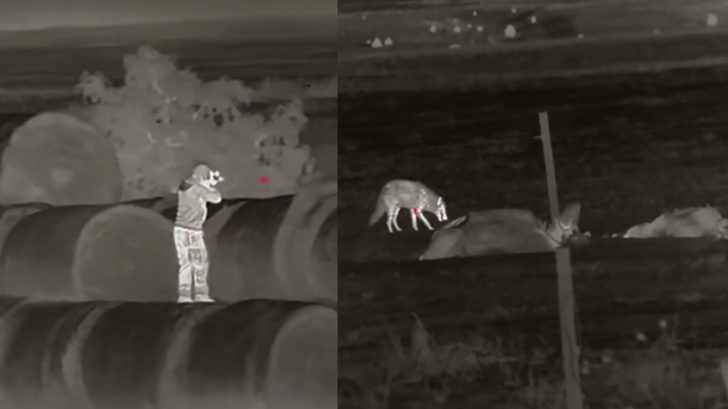 A farmer having a hard time keeping his cattle protected filmed a video of him using a thermal night vision camera to record shooting over 65 coyotes that were trying to kill his cattle.

Ultimate Night Vision shared the video on YouTube saying that, “Coyotes are presently the most abundant livestock predators in western North America, causing the majority of sheep, goat, and cattle losses.”

According to the National Agricultural Statistics Service, coyotes were responsible for 60.5% of the 224,000 sheep deaths that was attributed to predation in 2004.

The total number of sheep that died that year in 2004 from coyotes was about 2.22% of the entire sheep population in the United States.

They also added that Because coyote populations are typically many times greater and more widely distributed than those of wolves, coyotes cause more overall predation losses.

Wildlife experts say that coyotes typically bite the throat just behind the jaw and below the ear of the cow or sheep, which slowly suffocates the animal. Blood loss is said to usually be the secondary cause of death.

The video you’re about to see shows coyotes sneaking around his cattle field, sometimes just feet of his livestock, stalking them. Some of the footage even showed a few of his cattle that had already been killed by the coyotes and the predators were eating them.

The farmer, losing too many cattle and way too fast, had to do something to protect his livestock from the overwhelming number of coyotes visiting his property each night.

So the farmer filmed a video through a Rico RH50 MK1 thermal scope from InfiRay Outdoor showing him taking clean shots to instantly kill each coyote that was causing a problem.

Watch The Farmer Protect His Cattle Using A Thermal Camera Below