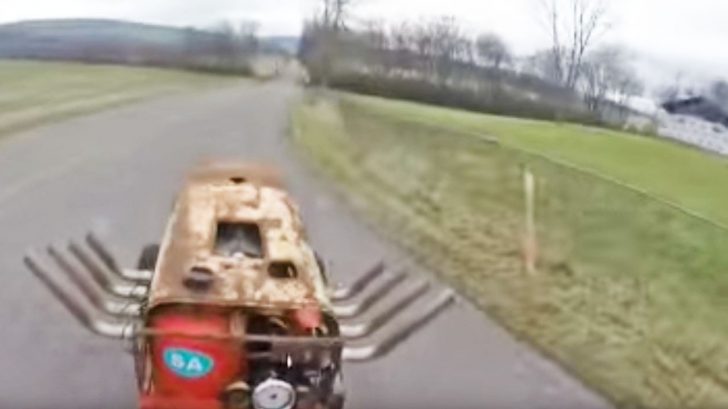 This may just be the most American thing ever! A badass farmer attached a massive Chevy block engine to his riding lawnmower, and what happens next will blow your mind.

While it doesn’t look as polished as the one on display below – it certainly sounds a helluva lot meaner!

The video opens with the man behind the redneck engineering giving a close up of his masterpiece before taking the jacked up lawn mower out for what can only be described as an insane road test.

The ride starts out a bit slow but once he gets out onto the wide open road he takes off – he’s zooming down the open country road faster than you would ever imagine a lawnmower could go. But let’s get real, this isn’t your average grass wagon!

Not only does it look like the thing drives at insane speeds, but it also sounds like it! The lawnmower makes you think NASCAR and will leave you in disbelief that the vehicle ever was used as a method to cut grass.

While it’s unclear what the farmer’s intention to use for his redneck creation is, we’re sure it will dominate whatever he uses it for.

One use Thomas Barker has found for his amped-up lawn machine is giving killer demonstrations to passerby and at local auto fairs – leaving a trail of dropped-jaws in his wake.

Check out the thundering blast from the engine below and prepare yourself for a full-throttle ride through the country on this open-air road monster that’s sure to be heard for miles!

You can watch the badass video below – and hang onto your hat!