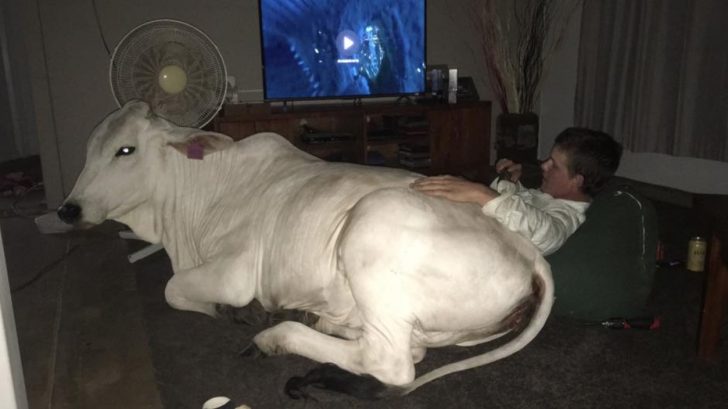 Farmer and cow lover Sally Webster from Georgetown, Queensland in Australia has a cow named Beryl the Brahman and she’s not your average cow.

Besides the fact that Beryl has her own Facebook page with over 40 thousand followers, she is most famously known for breaking into her owner’s house to lounge around the living room like she’s a human.

Beryl was picked up in 2015 at a cattle yard when she was just a tiny calf and wasn’t able to feed properly from her mother and needed to be bottle-fed.

Because of this, Sally took her home and began feeding her in the house until she was finally big and healthy enough to go outside with the rest of the farm animals.

However, the Brahman grew into a large and healthy calf who missed being in the house. She missed it so much that in late March of 2016, she started breaking into the home to be with the family.

When Beryl was just 9 months old and Sally was out of the house grocery shopping, Sally came home to find she had broken into the house and was calmly laying down on the living room floor.

Nothing in the home had been disturbed, broken, or moved, it just appeared she wanted to get in there to be closer with her family.

After taking a few photos, Sally shooed her out the back door but this wasn’t the last time Beryl would do something like this.

She is often found hanging out in the family’s outside shower, as well as poking her head through the kitchen window trying to join in on what the family is doing.

The many photos taken showed Beryl’s loveable personality and within a short amount of time, she grew quite the following.

Sally says that her popularity and fame has shined a light on the rural farm life of Australia and the importance of Brahman cows in the Australian economy.

Even though Beryl is the type of cow that humans eat, Sally says Beryl will always be their pet and is expected to live a long and happy life on the farm.

Watch how adorable she is in the video below!