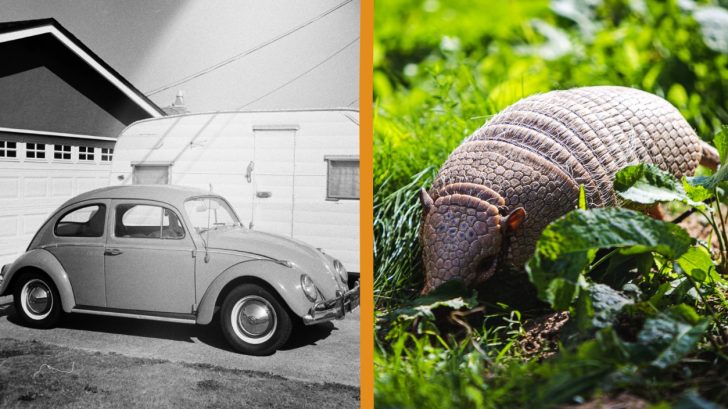 Juan de Dios Sota, a farmer in Argentina made an unexpected discovery in his yard and found the graveyard of four massive fossilized armadillos about 20,000 years old. They were hidden on his property near the Argentine capital Buenos Aires.

The Carmadillos: Fossilized shells of armoured creatures the size of Volkswagen Beetles that roamed the earth 20,000 years ago are discovered in #Argentina pic.twitter.com/tXHlBJSsd9

The Institute of Archaeological and Paleontological Investigations of the Pampa Quaternary (INCUAPA) explained that the local weather conditions helped the farmer spot something was in the dried riverbed. At first, only two fossilized shells were spotted. Then, while paleontologists explored more of the site, they found two more fossilized shells.

“We went there expecting to find two Glyptodonts when the excavation started and then two more were found!” Pablo Messino, an on-site archaeologist told Daily Mail.

Experts think the group of 20,000-year-old armadillos comprised of two adults and two young creatures. However, additional research and test are required to better understand their death condition, their sex, and their weight.

“It is the first time there have been four animals like this in the same site. Most of them were facing the same direction, like they were walking towards something,” Pablo added.

The 20,000-year-old armadillos’ shells were 5 feet long, and two inches thick. Its tail was used as a weapon to hit its enemy with. Based on the shared pictures, several experts believe the fossils found are of the glyptodont species. Glyptodont are ancestors of armadillos, known to have lived across South America and became extinct 10,000 years ago, at the end of the Ice Age.