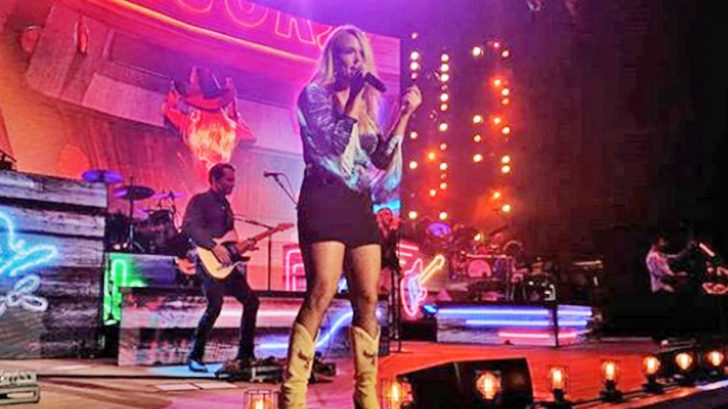 We all know that Miranda Lambert likes to have a good time. While she’s on tour, she makes sure she has her custom-made mic stand fitted with a cup holder so her favorite cocktail isn’t too far away.

During their co-headlining Bandwagon Tour, Lambert and Little Big Town shared the stage for quite a few songs. One of those being “Lean On Me.”

Another is for their collaboration on the song “Somkin’ and Drinkin’.”

Lambert’s fans know this about her so when a couple of them snuck some airplane-sized bottles of Fireball Whisky into the venue for the Wantagh, New York Bandwagon Tour stop in July 2018, they knew she would want to partake in the fun.

The fan in the front row who snuck in the alcohol bottles tossed one to Lambert during her set, and she actually drank it in the middle of the performance! Since the song that Lambert and Little Big Town were performing was titled “Smokin’ and Drinkin’,” it seemed like the perfect opportunity to, well, drink!

Lambert held the Fireball bottle in the air and took a giant swig of it and everyone cheered! Watch her take the shot in the Twitter video below.

When sneaking @FireballWhisky nibs in to the concert is against the rules but @Onedog2000 throws one to Miranda… ??‍♀️ pic.twitter.com/HoKErPleeA

Watch their full performance of “Smokin’ and Drinkin'” in the video below.