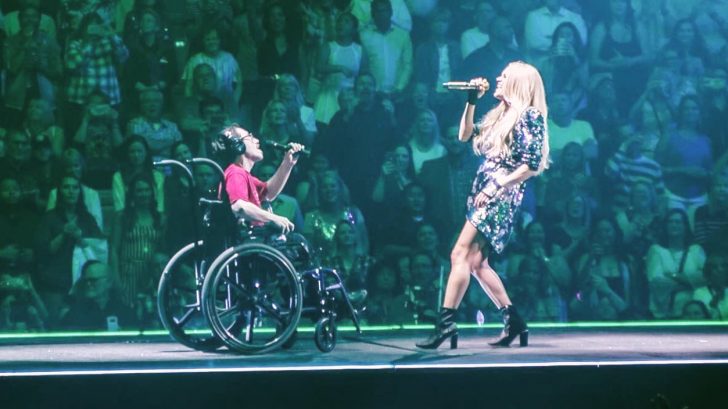 Carrie Calls On Fans To Help With Tour

As an artist, what do you do when you’ve recorded a hit duet, but you can’t have your duet partner with you when you want to sing it live? Well, you could just have video playing of your duet partner singing, you could video chat them if they’re available, or you can have someone else step in and sing their part, like one of your show openers.

But when it came time for Carrie Underwood to find a substitute duet partner for one of her hit songs, she did something different. She turned to her fans for help.

How about I sing and you do the rap on #TheChampion with me live on the #CryPrettyTour360? Let’s honor your inspirations together in a city near you! Details: https://t.co/7l66Nw6GZ9 pic.twitter.com/yqejN5WixQ

In a video message released before she kicked off her Cry Pretty Tour, Underwood told fans she was counting on them to help her perform her hit song “The Champion.”

Underwood co-wrote and sang the song with Ludacris, who performs a rap in the middle of the song. The two of them have only ever been able to perform together once, and that was during the Radio Disney Music Awards in the summer of 2018.

Since Ludacris was unable to join Underwood on tour, she called on her fans to take his place in “The Champion.” She asked fans to send in videos of them performing the rap in the song, and as long as they can do the whole thing, then they may get to join her on stage!

Even before Underwood’s first show kicked off, it was clear that this setup was going to result in a number of outstanding collaborations. One of those collaborations took place in Las Vegas, where she was joined on stage by a fan named Steven Schiraldi.

My “Champion” tonight! Steven, you were amazing!!! Thanks, Las Vegas, for showing us all so much love! You were an incredible crowd! ?#CryPrettyTour360 #Vegas pic.twitter.com/AsTSOyr2tW

In 2014, The Arizona Daily Star published an article about Schiraldi, a songwriter and devoted country music fan. He’s also bound to a wheelchair due to spina bifida, which he was born with.

Schiraldi used his life experiences to pen the song “Born in the O.R.,” which was eventually cut and released on HillTop Record’s America.

His love of music and country music specifically allowed him to cross paths with Underwood a few years ago. The two first met during her Storyteller Tour, and Schiraldi shared a photo with her, thanking her for “a magical memory.”

Schiraldi got the chance to create another magical memory with Underwood in Las Vegas, where he performed Ludacris’ rap in “The Champion” alongside the country music superstar.

This Show-Stopping Reunion Will Give You Goosebumps

The crowd went wild as soon as Schiraldi was wheeled on stage, and continued cheering for him throughout the rest of the performance. He remained on stage with Underwood for the remainder of the song, and even sang the chorus along with her.

If you didn’t happen to be one of the lucky fans at Underwood’s show in Vegas, don’t worry. An audience member happened to capture her collaboration with Schiraldi on video, and you can watch it below.

This is such an inspiring thing to watch! Schiraldi perfectly captures what “The Champion” is all about…so we’re glad he got the chance to perform it with Underwood!