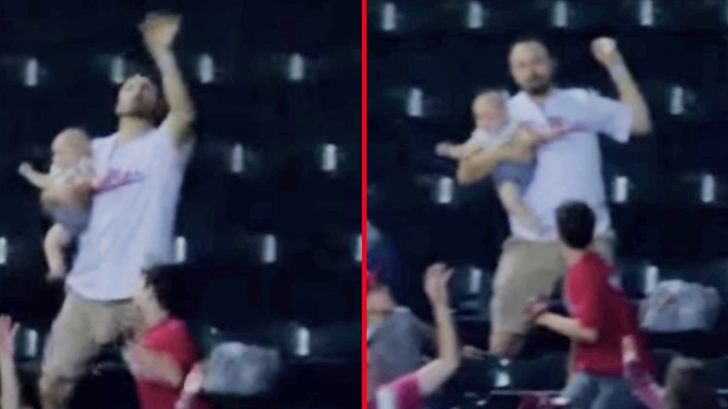 The Philadelphia Phillies took on the Arizona Diamondbacks on Wednesday night (Aug 7). In the top of the ninth inning, the Phillies were trailing 6-0 when superstar Bryce Harper hit a solo home run. It was one of the two silver linings for an otherwise painful showing by the 2008 world champs.

The other exciting moment came in the bottom of the fourth inning. Pitcher Jason Vargas served one up to the Diamondbacks’ Nick Ahmed, who fouled right. The announcers didn’t realize something incredible had happened until the entire stadium erupted in cheers.

Cameras cut to foul territory where a Phillies fan was holding the ball in his left hand, and a baby in the other! Replay showed that Dad was calm, cool, and collected as the ball came straight for him and his baby daughter in the top deck.

The man’s wife leaned far out of the way while he casually and confidently caught the ball bare-handed…baby in hand.

“With a baby in hand, he was able to make the grab,” one of the reporters said.

“Oh man, what a baller!” the other one said.

Turns out he played high school and college baseball, which is why he caught it so confidently! The family celebrated by taking photos with the ball. This bare-handed catch is difficult to make, even when someone has two hands to do it!

Watch his incredible catch below.