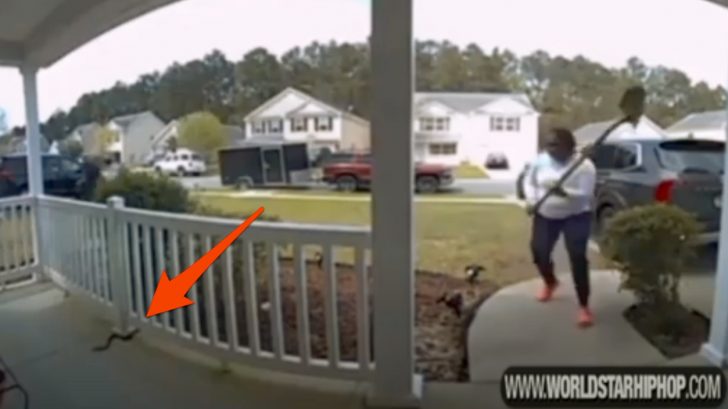 World Star shared a hilarious video showing the reaction of a family after they spotted a garden snake slithering across their yard.

Three of the family members were gathered in the front yard walking around frantically trying to figure out what they were going to do about the snake. It was slithering near bushes beside the porch.

One of the men had a shovel in his hand as another woman with a shovel in her hands walked up to join him. The guy grabbed his shovel and took a good swing from over the shoulder trying to hit the snake but he missed and the snake took off slithering under the bush.

The girl ran around to the bush trying to keep an eye on it as it was escaping behind the bush and slithering onto the porch. As it did, she watched and uncontrollably jumped around in the yard until she built up enough courage to run onto the porch and face it.

She held the shovel up over her head and swung with all her might. The snake was smart and saw it coming. It moved out of the way, dodging certain death, as the metal came crashing to the concrete. The woman was so shaken up about the snake that she threw the shovel as she swung and ran off the porch losing her footing and falling to the ground.

Fortunately for the snake, the family was not prepared to deal with it properly and it slithered off behind a flower pot and got away. Click below to watch the funny footage.